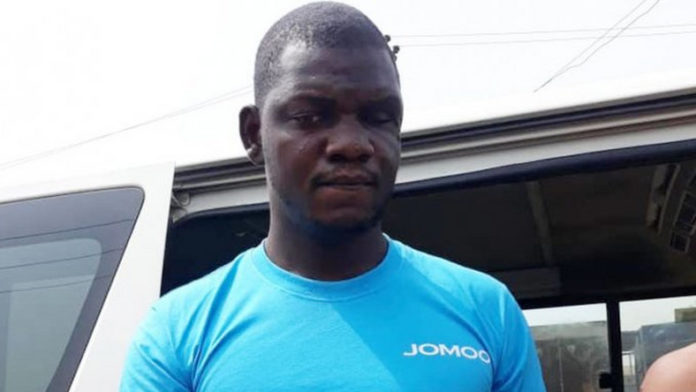 EMERGENCY DIGEST – A suspected member of the dreaded Boko Haram, Umar Abdulmalik, arrested by operatives of the Inspector General of Police  (IGP) Intelligence Response Team (IRT) has given a graphic account of how the sect plotted the 2014 Nyanya bomb blast, as well as the attack on a prison in Kogi State where members of the sect were serving jail terms.

According to the police, abdulmalik was arrested penultimate Thursday in his sister’s house at the Igando area of Lagos State where he had gone to treat bullet wounds.

In a confessional statement to the police interrogators, Abdulmalik said the bombs used in Nyanya were handmade in Kogi State.

He admitted leading other members of the sect in several attacks on banks, robberies and killings in the Federal Capital Territory (FCT), Abuja, Owo in Ondo State and in Lokoja, the Kogi State capital.

The 30-year-old Abdulmalik who hails from Okene in Kogi State, admitted killing over 200 persons before he was arrested.

He disclosed how he met one Mallam Mustapha who recruited him into the deadly sect in 2009.

He said, “I joined one of the Boko Haram cells in Okene headed by one Zeeidi and we carried out several bombings in Kaduna, Kano and Abuja.  Zeeidi was the person providing the bombs while my job then was to take them to our target locations. After a while, the Department of State Security (DSS) infiltrated our cell and started arresting members of our group and Mallam Mustapha was arrested and his mosque demolished.

“The idea of robbing banks came in later when we realised that we were running out of cash. He brought some guns and suggested we should attack the Koton Karfe Prison in Kogi State to free our members who were detained there. The attack on the prison was successful and we freed a lot of our members. While we were leaving we attacked some banks in Okene.

“Then we moved to Owo and attacked some of the banks there with dynamites and carted away large sums of money. We used some of the money to buy additional explosives, including materials we could use in producing none-metallic bombs.

“Later, a lot of our members, including Zeedi, were arrested after the bank robberies and the attack on the prison. We later moved to Abuja with the bombs we produced and I formed a new cell in 2014 and we carried out several bombings, including those at Banex Plaza, Nyanya and Kuje areas of Abuja, but unfortunately, our gang was busted and five of our members were arrested and our bombs, including the none-metallic, were recovered. I escaped and fled to Kano and went underground for two years before I returned to Abuja and formed a new gang and we went into full armed robbery.”

The suspect further claimed that a dismissed policeman, known as Apin Iron, later joined the gang with two Ak-47 rifles and a pistol.

“We normally visited his place to buy and smoke drugs and we became friends. In one of our visits, he told us that he knew several rich people that we could rob. He gave us information of a man who we robbed of N5m and we gave him N2.5m as his share. He also gave us several other jobs before I had an accident and damaged one of my eyes,” he added.