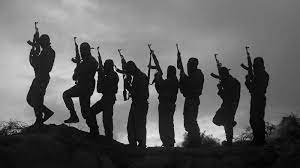 About 10 million Christians have been uprooted from their bases in Northern Nigeria in the last 12 years by Islamic Jihadists.

Out of this figure, no fewer than a whopping 43,000 have been killed in at least 17,500 attacks on churches and other Christian worship programs.

But the attacks are not restricted to only Christians. Some 29,000 moderate Muslims have also been killed by the rampaging Jihadists’ from July 2009 to July 2021.

These figures were given in a fresh report by the International Society for Civil Liberties and the Rule of Law Intersociety, a respected human rights group in Nigeria.

The group released its latest report on Wednesday, August 4, stressing that most of the Christian casualties were members of the Church of Brethren in Nigeria or EYN.

“The Nigerian Jihadists also sparsely and collaterally target moderate Muslims as collateral mistakes or punishments of those collaborating with the ‘unbelievers’ or in revenge for state actor attacks against their targets, or  for purpose of enforcement of Islamic Sharia law or code.

The group observed that Islamic Jihadists and their ‘esprit de jihad’ in the Nigerian security forces have been responsible for at least 18,500 Christian deaths arising from enforced disappearances, or those abducted and most unlikely to return alive.

It noted that the 18,500 jihadist captivity slain Christians are out of an estimated 26,000 of such deaths since 2009, put by a UN Agency in 2019 at “22,500”, adding that the total number of defenseless Nigerians abducted by the Jihadists since 2009 is put at 36,000, out of which 18,500 are Christians who are most unlikely to return alive while most of the Muslims abducted by Jihadists in Nigeria are later released unconditionally to their families, most of their Christian counterparts are killed in captivity or forcefully converted to Islam and marry thereafter.

“10 million Christians Uprooted In The North, Six Million Fled & Four Million  IDPs Generated: In the same past twelve years, it was also independently found that no fewer than 30 million Christians, especially in Northern Nigeria and their ethno-religion, were threatened and ten million of them have been uprooted, six million forced to flee their homes or geopolitical locations to avoid being hacked to death and over four million displaced and became IDPs; and out of  the four million Christian IDPs, over one million are found in Benue State and 1.3m in the ‘BAY’ States of Borno, Yobe and Adamawa, excluding Taraba. Tens of thousands of Christians especially the educated and the rich from Northern Nigeria have become ‘urban refugees’, asylum seekers and refugees at international borders and foreign countries, so as to escape being hacked to death or decapitated by the Jihadists. ‘Indirect’ deaths arising from the jihadist attacks in the country in the same past twelve years are in hundreds of thousands and Christians are the most affected including being the most brutally targeted and attacked. The ‘indirect’ jihadist fatalities arose from the outlawed military and jihadist groups’ bombings and killings arising from torture and custodial killings and enforced disappearances as well as other deaths arising from starvation, lack of adequate medical facilities and treatments, etc.

“Corroborative Open Doors (USA) Report: 2015: According to Ms Anna Mulder of the US based Open Doors, “between July 2009 and Dec 2014, a period of five years, BH killed between 11,000-11,500 Christians in Northern Nigeria, forced 1.6m to flee their homes to avoid being hacked to death by the Jihadists who also burnt or destroyed 13,500 churches and 1,500 Christian schools”. It has been further found, independently, that between Jan 2015 and July 2021, a period of six years and seven months, at least 4,000 more churches and 500 Christian schools have been attacked and destroyed or burnt in part or in whole by the Jihadists. While BH attacks on churches and Christian schools, from 2009 to 2014 were majorly launched and carried out in Plateau, Kano, Kaduna, FCT, Taraba, Borno, Yobe, Adamawa, Yobe, Gombe and Bauchi; the recent attacks especially by Jihadist Fulani Herdsmen have been targeted on Christian areas in Plateau, Benue, Southern Kaduna, Taraba, Adamawa, Niger and Kastina states.

“Over 500 Christian Communities Uprooted Since 2009: No fewer than 500 Christian communities have uprooted and seized or taken over, renamed and Islamized by the Jihadists since 2009. BH, ISWAP and Ansaru and Jihadist Fulani Bandits have forced Christians out of their ancestral homes and communities in Borno, Adamawa, Yobe, Gombe, Bauchi, Taraba, Kastina, Sokoto and Niger States, Jihadist Fulani Herdsmen have sacked hundreds of Christian communities in Plateau, Southern Kaduna, Benue, Taraba and Adamawa States. Over 100 communities have been affected in Southern Kaduna alone and in Benue, Plateau and Taraba States, Christian homes and churches have been destroyed or burnt beyond recognition and their communities and Christian sacred worship centers sacked and replaced with Mosques and Muslim settlements. In all these, Borno, Taraba, Adamawa, Plateau, Southern Kaduna and Benue States are the worst hit. For instance, indigenous Christians used to be dominant in Southern Borno, Southern Kebbi, Northern Adamawa, and parts of Gpmbe, 40% in Kaduna and over 80% in Southern part of the State, 80% in Plateau, over 90% in Benue and 60% in Taraba. They are also found in their large numbers in five Local Government Areas of Niger State including Shiroro, Munya and Rafi. But since 2009, these Christians and their settlements are facing threats of annihilation in the hands of the Jihadists.

“Over 80% of fertile farmlands and cultivated farmlands ancestrally owned by indigenous Christians across the country have also been brutally threatened or attacked or occupied, leading to country-wide chronic food shortages and galloping increases in their prices. In the ancestral Igbo Lands of Benue, Kogi, Delta, Edo, Rivers, Anambra, Imo, Ebonyi, Enugu and Abia states, Intersociety’s recent research had found that no fewer than 700 forests, bushes and farmlands have been threatened, or attacked, or occupied by the Jihadist Fulani Herdsmen since 2016.

The News reports that there have been widespread coordinated attacks on Churches, Christians and Mosques across northern Nigeria since 2009. The attacks were launched mainly by Boko Haram insurgents, ISWAP and a sandwich of Jihadist groups operating across the country.