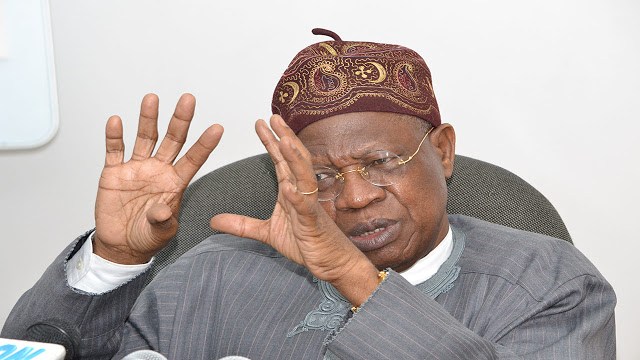 The Federal Government, yesterday, raised an alarm, accusing the opposition of plotting widespread violence across Nigeria in order to truncate the forthcoming general elections.

It said armed bandits and Boko Haram insurgents have been mobilized to engage in massive attacks and other acts of violence in several states across the country.

The areas being targeted, according to government, include Adamawa, Bauchi, Borno, Benue, Kano, Kaduna, Nasarawa, Plateau, Taraba and Zamfara states.

The warning came same day the National Orientation Agency (NOA) said that reports from its field officers indicated that five states would likely be engulfed in violence during the forthcoming elections. Minister of Information and Culture, Lai Mohammed, who disclosed this at a news conference in Abuja, said the government was in possession of “credible intelligence” that the looming violence could pose a threat to the 2019 general elections.

Mr Mohammed said that the opposition might have chosen to unleash violence on the polity because there were indications that the results of the election might not favour them. His words: “Having realized that their fortunes have dwindled badly ahead of the polls, the desperate opposition is orchestrating widespread violence with a view to truncating the elections, thus triggering a constitutional crisis that could snowball into the establishment of an interim government.

“Nigerians are alerted to the dangers posed to the forthcoming elections by ”unscrupulous, unpatriotic and desperate characters who will not hesitate to destabilize the country if they cannot achieve their inordinate ambition’.

“The Benue-based armed criminal group, led by Terwase Akwaza, also known as Gana, has been commissioned to strike soft targets in Benue, Nasarawa, and Taraba states. “In Kano State, a group of notorious miscreants have been mobilized by some prominent opposition leaders to provoke massive chaos before, dur-ing and after the elections.

“There is also an international dimension to the evil plan. Some armed mercenaries from Niger Republic have been contracted to attack top government functionaries, including state governors, across the North- West between now and the elections.” The minister stated that the government is working to stop these attacks.

“The Federal Government is taking every possible measure to counter these evil plans by unpatriotic anarchists and ensure the success of the 2019 general elections. The administration’s commitment to a credible, free, fair and peaceful elections is unshaken,” he said.

Director General, NOA, Garba Abari who addressed stakeholders in Abuja during the flag-off of the nationwide sensitization on peaceful elections, urged politicians in the five states to put the national interest above any selfish desires so as to avert violence during the polls.Abari, who expressed concern that politicians were using unsuspecting youths nationwide as instruments of electoral violence, said that considering the pre-election violence witnessed in Lagos and Taraba states, it was important that stakeholders applied caution to avoid a breach of the peace.

Mr Abari urged the youth across Nigeria not to yield themselves as willing tools of violence to politicians, saying they are only interested in satisfying their selfish interests. “Our youths who are easily used by unscrupulous politicians as cannon fodder for the perpetration of violence must be called to order.

This responsibility lies on parents, guardians, religious leaders, opinion moulders, traditional rulers and youth leaders across the country as we draw near to the commencement of the general elections. “It is indeed time for our youth across Nigeria to say no to greedy, selfish politicians who would want to tempt them with the lure of money and other material benefits to lead them to destruction,” he said.

However, the Peoples Democratic Party (PDP) has described as irresponsible and ludicrous, the allegation by the Information Minister that the party is mobilising groups to stage violent attacks in various parts of the country.

PDP National Publicity Secretary, Kola Ologbodiyan, at a press conference yesterday, said the allegation was a way to frame and arrest leading members of the opposition by the Federal Government. He said Nigerians should hold the All Progressives Congress (APC) responsible for any escalation of violence in the country during the election.

“Severally, we have alerted the nation that the APC and the Buhari presidency, having come to the reality of their imminent and disgraceful loss at the polls, have embarked on a strategy to foment crisis in our dear nation and blame the opposition,” he said.

According to him, PDP is a party that preaches against violence, noting that the party had conducted rallies in many states and geo-political zones without a record of violence.”The APC cannot make a similar claim of a peaceful rally in its few attempts at interacting with its members and the public.

“Its party primaries ended in violence and multiple deaths. Its rally in Lagos State ended in a fiasco and recorded fatalities. Its presidential candidate is known all over the world for inciting supporters against peace-loving Nigerians, when he said that baboon and dogs will soak in their blood.

“On behalf of Nigerians, we thank Alhaji Lai Mohammed for mustering the courage to bring the nefarious plans of the APC to the public. “The PDP and Nigerians are prepared for a peaceful election in defence of our democracy,” Ologbondiyan promised.