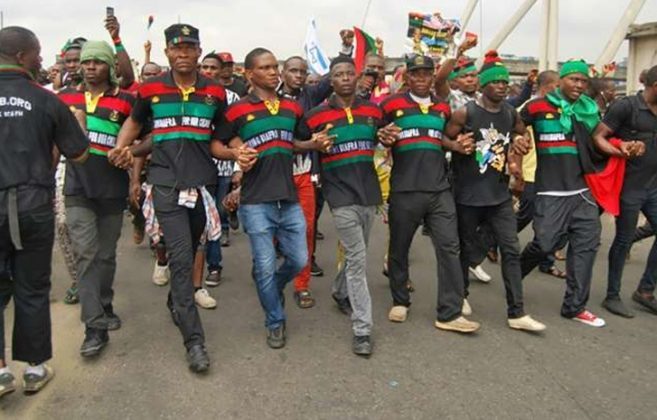 We will kidnap and kill five Southeast governors, IPOB threatens

Ebonyi State Governor, David Umahi, has raised the alarm concerning an alleged threat by some members of the Indigenous Peoples of Biafra to kidnap five Southeast governors.

The governor added that the kidnappers threatened to kill the victims after they may have collected ransom.

They also vowed to commit suicide after the entire operation, Umahi said.

He said the renewed threat came via text messages sent to his wife.

The governor warned that Ebonyi State was not among the region that formed the so-called ‘Sovereign States of Biafra as proclaimed by the Indigenous Peoples of Biafra.

Umahi, who also serves as Chairman of the South East Governors’ Forum, however noted that some of the agitations of IPOB were genuine but for the approach being deployed in realising their objectives.

He disclosed this on Sunday at Nkwegu Military Cantonment in Abakaliki, the state capital, during the official flag off Operation Python Dance (Egwu Eke) Phase III by the Nigerian Army.

He said, “The GOC, you are coming at a time we had note from our brothers and sisters of IPOB sending text messages that there will be no elections and insulting the leaders,  particularly the southeast governors.

“Just a few days back, they sent text message to my wife that the five governors of southeast would be kidnapped and that their (IPOB) security would overpower that of the governors and after ransoms are paid, they would kill them and kill themselves.

“That is laughable; although as a leader in the zone, I must say that some of their complaints are genuine; but the approach is very bad. That is why the leaders of southeast are not in support of their approach.”

“So, I use the opportunity to ask that other geopolitical zones have youth pressure groups, but these groups should not have same approach as IPOB.

“And so we are not against them, but their approach. And as Chief Security Officer of the state, I do not welcome them.

“Ebonyi state is not part of Biafra. We are a sovereign state, and we don’t want to be colonised again, as we are a state demanding better treatment in the affairs of our nation.

“I know they will attack me on social media, but it doesn’t stop what we are doing.”