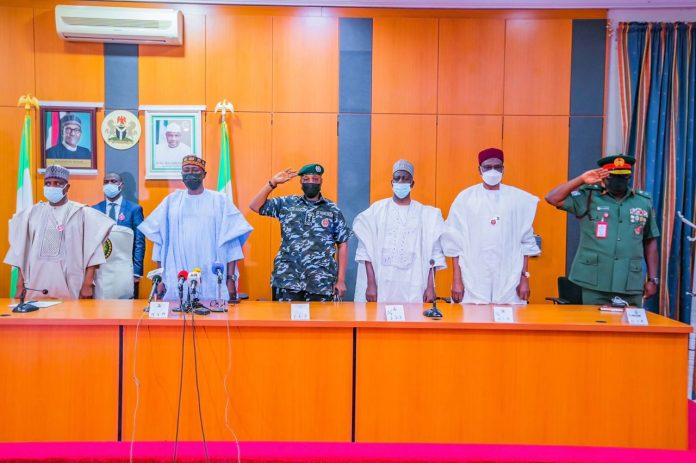 Through the processes, credible facts regarding terrorists and criminals’ syndicates are uncovered thereby subsequently leading to their timely interceptions and eliminations.

It is gratifying and heartwarming the recent momentum and successful operations Nigerian troops against criminal elements holding the country to ransom .

Their gallantry and unwavering patriotism, which is demonstrated in the renewed onslaught against bandits’ terrorists in the northwestern part of the country have continued to yield additional success stories.

This is evident, especially with the recent elimination of the two notorious wanted bandits’ leaders, Alhaji Auta, and Kachalla Ruga, in Zamfara forest by the Nigerian military under Operation Hadarin Daji.

PRNigeria reported that the bandits’ kingpins met their waterloo when the NAF fighter jet, acted on credible intelligence, and bombarded their enclaves by multiple airstrikes at Gusami Forest and Tsamre Village in Birnin Magaji Local Government Area of Zamfara, during the early hours of Saturday.

A military intelligence source confirmed that aggressive bombardments by NAF aircrafts, have in recent times been very precise and effective in hitting bandits’ enclaves, eliminating their leaderships and followers, in the process.

“These operations have reassured citizens of the commitment and dedication of the military and other security agencies, towards bringing the threats posed by banditry under check, in no distant time.

“The citizens, especially around the affected communities, are enjoined to continually provide security agencies with credible information that will go a long way towards tackling the threats to their lives and livelihood,” he said.

The Daily Trust also confirmed from local sources the successes of the military offensive .

The Daily Trust reported that a resident of the area who spoke in anonymity said the bomb that killed Auta was dropped on him while riding along Nasarawa Mailayi-Gusami Road.

Another resident of Birnin Magaji, Jamilu, said 12 of Auta’s men were eliminated when they rushed to the scene to pick his body after he was killed.

However, two other sources, gave the casualty in the second attack as seven, who, they said, were killed after Auta’s funeral.

“Mourners who had gathered after he was killed were bombed and seven of them were killed. After the jet left, their friends came back to move the bodies but the jet returned and bombed them.

“Right now no one knows how many were killed as no one is willing to go there,” said, Aliyu Birnin Magaji.

Recalls that, Auta is among the four arrowheads of the gunmen terrorising the Birnin Magaji area, in Zamfara state, others being Alhaji Shingi, Alhaji Nashama and Shehu Bagewaye.

The raid on Auta’s camp is a second major victory recorded by the NAF within the space of a month, after the raid that killed the twin kingpins, Tawaye, in Dumburum in the first week of December. Again, in the third week of December, the air troops were also on offensive as they raided another bandits’ kingpin hideout, Bello Turji, who was reportedly incapacitated due to injuries he sustained, while a scores of his gang members were wasted in the process.

Looking critically from these successive victories, the vital role of intelligence gatherings and information sharing among the troops and residents of the communities can never be ignored. This can only prove the fact that the joint intelligence operations from military and security services are performing optimally in obtaining, processing and implementing credible intelligence.

Just as synergy among security forces are very essential so also is the colloboration between intelligence services in tackling the monumental secuity challenges.

During a recent retreat for Defence Advisers/Attaches Conference, organised by the Defence Intelligence Agency (DIA), the Defence Minister of Defence, General Bashir Magashi challenged intelligence operatives to explore all avenues within their respective systems to come up with innovative ways of identifying and confronting the security challenges facing Nigeria as a nation.

Speaking on the same vein at the event, the National Security Adviser (NSA), Babagana Monguno, said Nigeria had been adopting both kinetic and non-kinetic approaches in dealing with security challenges, adding that both approaches had been yielding results.

Monguno, who represented by his Principal General Staff Officer, Major General Abubakar Ndalolo, said the government also laid emphasis on the integrated approach, which recognised the roles of ministries, departments and agencies as well as the entire society in “tackling our security challenges.”

In his remarks, the Chief of Defence Intelligence (CDI), General Samuel Adebayo noted that advancing counterterrorism efforts can only be enhanced through inter-agency cooperation.

According to him, the need for a continuous reappraisal of strategies, operational tactics and methods of intelligence gathering and sharing in order to efficiently deal with our security challenges, are very paramount.

While we commend the improved synergies among the security services, there is still the need for improvement due to the fluid nature of the threats posed by the enemies.

There are indeed the need for collaborative efforts, among the government, armed forces and other security agencies as well as community members in order to surmount the challenges bedeviling the country.

More commitment is required in tackling the insecurity in the country through soft-approach which involves participation of critical stakeholders from different sectors of the society, such as religious actors, youths, teachers, women, civil society, media, law enforcement as well as the security and intelligence agencies.

Mukhtar is a Staff Writer with Emergency Digest.