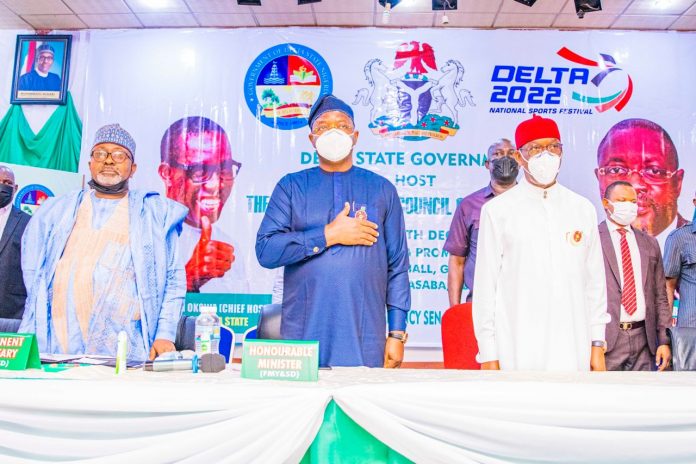 The 21st National Sports Festival tagged Delta 2022 is scheduled to take place between November 2 – 15, 2022 following the resolution of the Technical Committee of the National Council of Sports.

The Honourable Minister of Youth and Sports Development, Mr Sunday Dare disclosed this today in Asaba, the Delta State Capital during the extra-ordinary National Council of Sports Meeting and Inauguration of LOC for hosting of the National Sports Festival.

He said that the Federal Ministry of Youth and Sports Development will continue to collaborate with the Delta State Government with a view to ensuring the successful hosting of the games.

The Minister who commended the President Muhammadu Buhari-led administration for the progressive and giant stride ideas deliberately put in place to thrive sports development and the entire ecosystem in the country, where the Medium Term National Development Plan 2021 – 2024 allocated N88billion to Sports Development and N60billion to Youth development in the next four years, noted that sports development under the purview of the present government has attained a new and impressive height which has invariably secured a seat at the table when it comes to allocation of resources as an area of business.

He stated further that the Federal Ministry of Youth and Sports Development (FMYSD) in collaboration with the Office of the Head of the Civil Service of the Federation (OHCSF), have established a Department in the Ministry that is solely responsible for National Sports Festival and Para-Sports.

With this development he said, ‘’Para-Sports has been given the desired and long awaited attention’’.

While citing Sierra Leone as an example, worthy of study, Mr Dare said, ‘’we can learn something from Sierra Leone’s sports system by making all sports federations autonomous and incorporated’’. He stressed the need for the national sports federations to have annual registration from the National Sports Commission which will certify and introduce them to the Nigerian Olympic Committee as the recognized federations.

Dare commended the Executive Governor of Delta State, His Excellency, Senator Ifeanyi Okowa and the sports loving people of the state for hosting the extra-ordinary Council of Sports Meeting and granting all necessary logistics at the shortest notice.

He urged other state Governors and philanthropists to emulate Dr. Okowa who single handedly adopted the highest number of athletes as a result of his interest in sports development in the country.

While declaring the Council open, the Executive Governor of Delta State, His Excellency, Senator Ifeanyi Okowa described sports as a tool for youth development and national unity as well as socio-economic development of the country.

According to Okowa, ‘’sporting success does not happen by chance, it comes through years of planning, sacrifice, dedication and commitment to excellence, adding that there is still a lot to be done to our sports development as a nation.’’

He said that countries that have continually excelled at global stage put in enormous resources to discover talents and therefore treat them as national assets.

The Governor challenged the stakeholders in the industry on the need to develop a holistic approach to sports development and management in the country.

Dr. Okowa also urged the Council to develop policies and action plans to maximize the contribution of sports to national development, adding that sports has the path of building the youth with the values of discipline, team work, fair play, and essential qualities to succeed in life.

He said that necessary measures should be put in place for the development of a sport industry that can chart a way forward by lifting the nation’s teeming youth from poverty to prosperity so as to earn valuable foreign exchange for the country.

Earlier in his opening remarks, the Permanent Secretary, Federal Ministry of Youth and Sports Development, Alhaji Ismaila Abubakar implored the organizer and the Host State to draw their timeline of activities for effective and efficient delivery of the upcoming Festival in order to ensure the desired success.

The Council received and adopted two Memoranda of Understanding (MoU) on the establishment of Department for National Sports Festival and Para-Sports in the Ministry and November 2 – 15, 2022 as official date for the hosting of National Sports Festival.
Signed
Mohammed Manga
Director (Press and Public Relations)
December 20, 2021