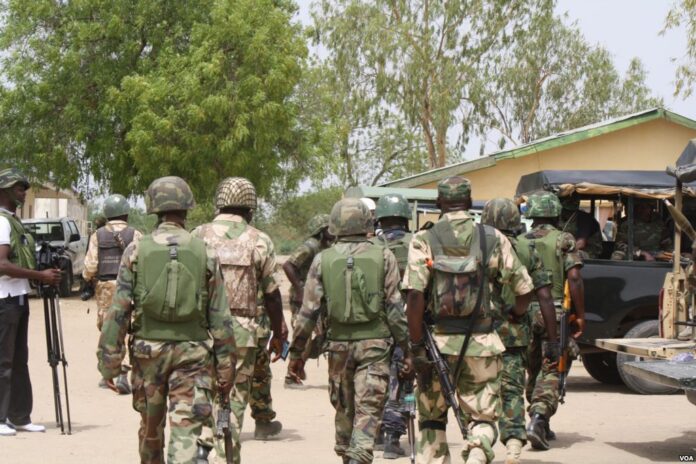 In a related development, 18 criminals associated with pipeline vandalism, piracy, illegal bunkering and armed robbery have also been arrested by military troops in the South South.

The kidnappers were killed in a gun duel with troops, who were on an anti-kidnap/anti-armed robbery patrol at Oviere community, says Brig. Gen. Bernard Onyeuko.

Onyeuko, Acting Director, Defence Media Operations, DMO, disclosed this at a media briefing on military operations, across the country.

He said: “During the encounter, troops recovered some arms and ammunition from the criminals, while 100 pinches and wraps of heroin and cannabis sativa respectively, were found in their possession.”

“Consequently, a total of One Million, Fourteen Thousand litres (1,014,000 ltrs) of illegally refined Automotive Gas Oil; 50,500 litres of Dual Purpose Kerosene and One Million, Eight Hundred And Eight Thousand, Five Hundred litres (1,808,500 ltrs) of stolen crude oil were recovered in the course of the operations.

“In addition, 18 criminals associated with pipeline vandalism, piracy, illegal oil bunkering and armed robbery were arrested within the period.

“Also, troops recovered 6 assorted arms, 586 rounds of different caliber of ammunition, 12 AK-47 rifle magazines as well as 278 pieces of galvanized pipes and 40 wooden boats used for illegal oil bunkering activities in the course of the operations.

“All the arrested criminals and recovered items have been handed over to relevant security agencies for further action,” Onyeuko said.