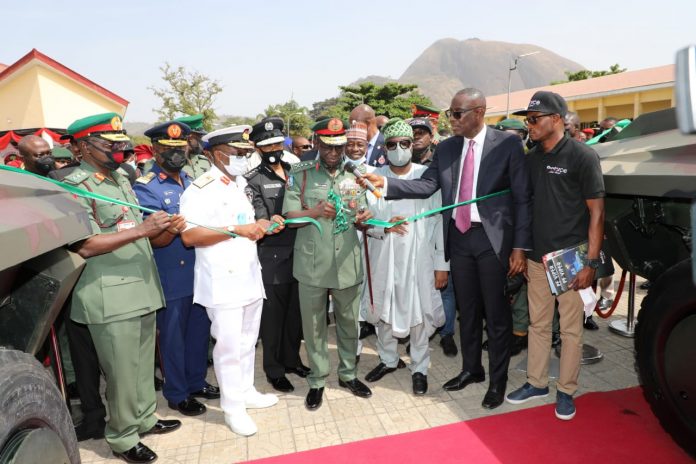 Proforce Collaboration with Nigerian Army as Panacea for Insecurity

In modern warfare, having in its possession sophisticated firearms and ammunition is critical to any military force winning battles, especially against enemies of the State and other adversaries.

Though nothing stops a country’s military from procuring the aforestated weapons from other parts of the world they are produced, it is more befitting that nations, especially developing countries that are plagued by sundry violent crimes, boost their local capacity for military hardware production.

For Nigeria, the long road to manufacturing military equipment and weapons to tackle Boko Haram and the Islamic State of West Africa Province, ISWAP, most especially, did not start, today.

What is called Mine-Resistant Ambush Protected, MRAP, vehicle; a light tactical cars designed specifically to withstand improvised explosive device attacks and ambushes, were severally produced by the Defence Industry Corporation of Nigeria, DICON, during the tenure of Lt. Gen. Tukur Buratai (rtd) as the Chief of Army Staff. They were christened Ezugwu MRAPs.

It has also expanded its portfolio to cover armoured patrol boats and unmanned aerial vehicles, amongst others. The company’s flagship APC is its PF2, which has been exported to Rwanda, the Central African Republic and South Sudan (it is used for United Nations peacekeeping missions in the CAR and South Sudan).

At home, the Nigerian Police Force has acquired a number of PF2 APCs, and this includes by Rivers State and Lagos State. The 3.2 ton PF2 is armoured against multiple calibre ammunition up to 7.62×51 mm, as well as against grenades and landmines (it can withstand 10 kg blasts) in excess of Stanag 4569 Level 1.

It is based on the Toyota Land Cruiser chassis and is powered by a six cylinder, four litre engine giving a top speed of 110 km/h and range of 650 km. Payload is between 800 and 1000 kg or 6-8 people. The vehicle has eight gun ports and can mount a turret on the roof. Standard equipment includes an electric winch, air conditioning, public address system and strobe lights.

On the larger end of the scale, Proforce’s flagship MRAP is its Ara (Thunder), which is designed and manufactured in Nigeria. The latest version of the Ara features a fully monocoque hull and is built to STANAG level 4569 standards with double skin protection of Level 3A and 3B, and an underbelly of 4A and 4B.

This protection level ensures an underbelly with a V-shaped hull design that can withstand a 100 kg mine. The higher ground clearance of 442 mm and the central tyre inflation system enhances the vehicle’s off-road capabilities and can take this vehicle to urban, mountainous and challenging rural terrains. Run flat inserts in the wheels can maintain mobility up to a distance of 50-60 km in case a tyre is punctured.

With the capacity to carry up to 12 personnel plus equipment, the 15 ton Ara can be configured into multiple variants including recovery, command and control, ambulance, field kitchen and reconnaissance. A 12.7 mm machine gun can be mounted on a 360 degree roof turret, which can be open or fully enclosed.

It is heartwarming to note that the Nigerian Army has placed large orders for the Ara and has used the vehicles in combat against Boko Haram insurgents, particularly in the northeast of the country.

Proforce said the visit was an endorsement of the Proforce brand, especially as Proforce is a major supplier to the Nigerian Army and its vehicles have been proven in battle in Nigeria, as well as Chad and other parts of Africa.

The COAS was given a comprehensive tour of Proforce’s facilities and capabilities, including its corporate vehicle armouring facility, Helmets and Vests manufacturing section, and maintenance, repair and overhaul (MRO) facility. The latter repairs Nigerian Army vehicles like the Cobra and Steyr armoured personnel carriers (APCs) and Navistar and Caiman mine-resistant, ambush-protected (MRAP) vehicles.

Other areas of competence showcased to the COAS were Proforce’s unmanned aerial vehicle (UAV) and trainer jet facilities as well as the company’s military communications, signals intelligence (SIGINT), open-source and web intelligence (OSINT), and naval capabilities.

The Nigerian Army through its investment arm, Nigerian Army Welfare Limited by Guarantee (AWLG) has acquired a 15% shareholding of Proforce Limited. As a result, the Nigerian Army collaborates closely with Proforce, as well as other domestic armoured vehicle manufacturers.

During his factory visit, the COAS said it is best to acquire military hardware that has been developed and manufactured indigenously. Aside the points highlighted by the COAS, the collaboration between the Nigerian Army, and Proforce, indeed, will greatly help support the former’s desire to be self-sufficient.

Mahmud, a Defence Correspondent, wrote in from Abuja, via: [email protected]