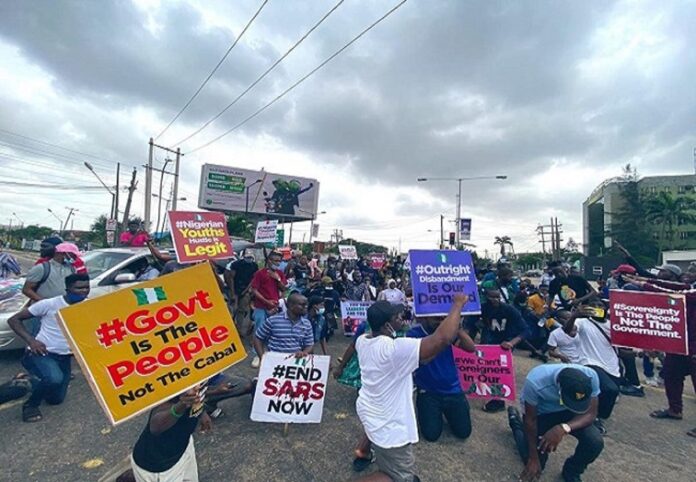 Counsel to the state government on the Judicial Panel of Inquiry on #EndSARS protests, Abiodun Owonikoko said this during an interview with Arise News monitored by THISNIGERIA on Thursday.

Recall that the Justice Doris Okuwobi-led panel had on Monday, November 15th submitted its report to the LASG.

In the 309-page document titled “Report of Lekki Incident Investigation Of 20th October 2020”, the panel revealed that at least 48 protesters were either “shot dead, injured with bullet wounds or assaulted by soldiers.”

Reacting, Owonikoko berated the report and said that there were several details, information left out of it by the panel.

He accused the panel of awarding damages to alleged victims of the incident who are still allegedly alive.

The lawyer cited an example of a 24-year-old man that was killed in a police barracks but was not included in the final report.

Owonikoko stated further that the Lekki Concession Company (LCC) was not allowed to present any evidence by the judicial panel.

He alleged that the panel collected the sum of N5m from a woman who was awarded N10m for a gunshot injury.

“By law, the findings, conclusions and recommendations of the panel were not supposed to be made public. The report making rounds on social media is a draft of a minority opinion because I was there all through the proceedings. I am particularly shocked to read what is contained in the report because it is not completely accurate. I sighted over 40 discrepancies in this report, including awarding N15m to someone who was a witness to a police brutality incident that had nothing to do with the Lekki incident. What kind of report is that?

“All the evidence we were able to gather during the proceedings, none of them could be fully established. From the very beginning, the panel lacked the judicial competence to determine the outcome of this incident. The mistake made by the government was not setting up an entirely different panel to look into the Lekki incident because there were some members of the panel that were protagonists in the case against the Police. They were not supposed to be a part of it,” he said.

Owonikoko stated further that some members of the panel already had “a position as they ensured that the Lekki Toll Gate was not reopened four months after the incident, despite the LCC trying to show present evidence to vindicate the company. ”

He also accused human rights lawyer, Ebun-Olu Adegboruwa (SAN) of being absent for the most part of the proceedings.

“Adegboruwa cannot give an objective report on the Lekki incident because he was always absent during the sittings which were held on Saturdays. He already had a case in court, challenging the legality of the toll gate. It is worrisome that he also signed off on the report, given that he was mostly absent. It makes the report tainted,” the lawyer said.