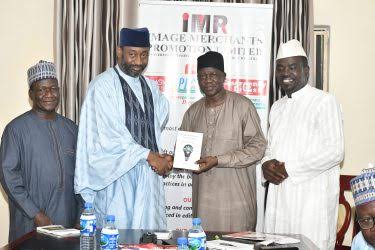 How We Defied Boko Haram, Resisted Attempts To Close UniMAID – VC
The Vice Chancellor of the University of Maiduguri, Professor Aliyu Shugaba, has given graphic details of how the University has managed to remain in operation despite the menacing presence of Boko Haram terrorists in Borno state.

The VC said a combination of resilience on the part of the school management and the support of all security agencies as well as cooperation of hunters and vigilante groups have managed to keep the school premises relatively safe from the dreaded sect whose ambition is to wipe out all traces of western education.

Speaking on Thursday afternoon in Abuja when he paid a courtesy call on Image Merchants Promotions Limited (IMPR) -Publishers of PrNigeria, Economic Confidential, Politics Digest, Arewa Agenda, Emergency Digest, Tech Digest and Spokespersons Digest – , the Professor of Bio-chemistry said the management of the University sensitized all the staff and students on security measures, and also beefed up the protection of its perimeter fences, to ward off attacks from the insurgents.

He added that even when a Professor of Veterinary Medicine was killed in 2017 by suicide bombing, rather than giving up and shutting the school, he and his management staff opted to be more proactive on the issue of security.

The VC noted that the security situation was so tense that there was a time the Minister of Education visited Maiduguri with the aim of closing the school but he and his staff and students resisted it and chose to defy the challenges.

“We had about 40,000 student population that time and all the roads leading out of the city had either been shut for fear of Boko Haram or taken over by Boko Haram elements. Even the only one working that time, the Maiduguri-Yobe-Kano road still contained a lot of Boko Haram threats.

we chose to shut the school? If we did, the insurgents could have either harmed them or taken them and turning them to terrorists. So we decided to stay in school to protect them and continued our activities of teaching, learning and research,” the VC said.

He added that: “Right now, we have so much inculcated resistance into our students that if they hear bomb blasts, they laugh it off and call it ring tunes.”

The renowned academic also informed the gathering that the University has turned the Boko Haram challenge into an opportunity to improve its services in significant ways, adding that the University of Maiduguri now has the best department for studying violent extremism and also a massive Centre for Peace and Conflict Studies.

He thanked IMPR management and Staff for being the number one media conglomerate in Nigeria in terms of credibility, authority and balance in news writing and reporting especially in the professional manner they report events surrounding the University.

Reacting to his offer of robust partnership, the IMPR boss, Mallam Yushau Shuaibu, pledged to reciprocate in that regards.

Thanking the VC and his management team for the visit, Mallam Shuaibu commended the delegation for the great job they are doing in keeping the University afloat in the face of life threatening dangers.