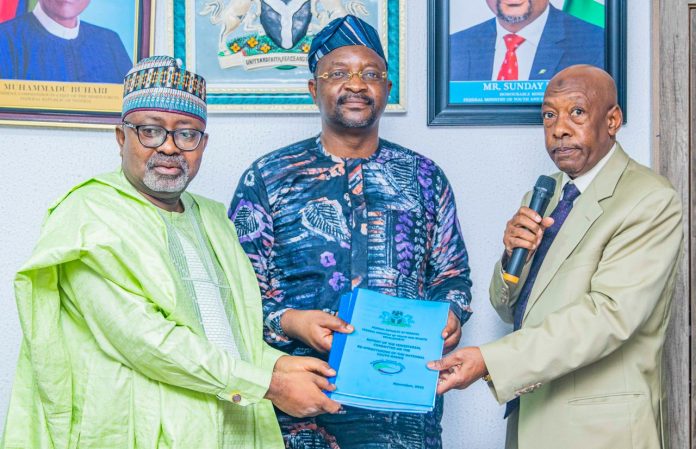 The Honourable Minister of Youth and Sports Development, Mr. Sunday Dare made the disclosure today in his Office in Abuja, when he received the report of the Ministerial Committee on Restructuring of the National Youth Games (NYG) set up to review the flaws in the last edition at Ilorin and to further re-strategize as well as proffer solutions that will make future versions more dynamic and result oriented with a view to giving grassroots sports development a boost.

According to him, the Federal Executive Council’s approval which is, first of its kind in the history of the Ministry, is a confirmation of the present administration’s commitment to the development of the Nigerian youth as well as its recognition of sports as a business in the country.

It is in line with this, Dare said that, the Ministry on its part had discreetly set up the Ministerial Committee on NYG to take a critical look at the last edition of the youth games, identify flaws and make recommendations that will bring about a turn-around in grassroots sports development in the country.

“NYG speaks to grassroots sports development as the bulk of those who go for sports festival are discovered from there. If three of the hundreds of talents seen at Ilorin are picked up, they can bring a lot of honours to the country in future international games”, the Minister said.

He explained that the recommendations of the Committee will serve institutions, strassing, “when grassroots sports is gotten right, every other competition will find its bearing as it will boost the discovery and development of future talents in the field of sports in Nigeria”.

The Minister who stated further that he had written to the Nigeria Identity Management Commission (NIMC) to assist the Ministry on the issue of age cheat during the games, noted that the Ministry had zero tolerance for any form of cheating or doping in sporting competitions and as such will leave no stone unturned in nipping it in the bud.

While commending the Committee for a job well done, the Minister applauded the President Muhammadu Buhari-led administration for its commitment to youth and sports development in the country, stressing that the resources allocated will ensure a re-consolidation for the sector in the next four years.

Speaking ealier, the Permanent Secretary, Alh. Ismaila Abubakar assured that the Ministry will continue to provide an enebling environment for the proper utilization of the resouces deployed by the Federal Government for the development of our teeming youth through various government initiatives and sporting activities in the country.

He commended the present administration for its commitment to the development of Youth and Sports as part of efforts geared towards the socio-economic growth of the nation.

Also in his remarks, the Chairman, Ministerial Committee on Restructuring of the National Youth Games, Alh. Abba Yola, stated that part of the committee’s recommendation includes the need for inclusion of private sector funding strategies for a better National Youth Games in the country.
Signed
Mohammed Manga
Director, (Press and Public Relations)
November 10, 2021