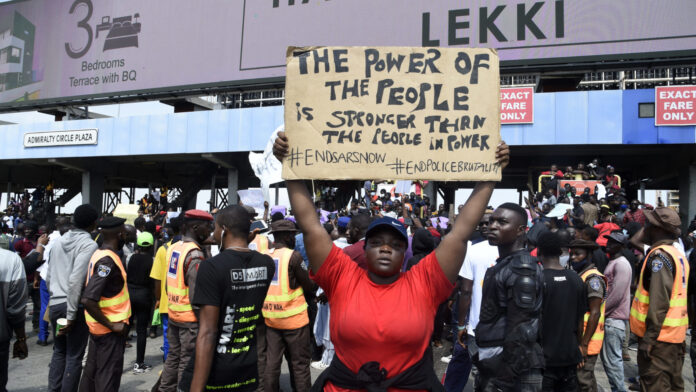 A reporter of Legit TV identified as Abimbola has been reportedly arrested by the police operatives during EndSARS memorial protest at Lekki Tollgate, Lagos State where some Nigerian youths were allegedly gunned down on October 20, 2020.

DAILY POST reports that despite warnings by the Lagos State Police command against the memorial protest, some activists, including Omoyele Sowore and others stormed the area on Wednesday morning.

It was learnt that the journalist was picked after failing to present his identity card. In a live video on Facebook, Abimbola was sighted being dragged by some police operatives.

Efforts by Daily Post to reach the State’s Police Public Relations Officer, CSP Adekunle Ajisebutu for comment on the incident, proved abortive as at press time as he could not take his calls.

However, the State’s Commissioner of Police, Hakeem Odumosu had earlier today said the command would deploy all legitimate means to stop or neutralise the planned protests to mark #EndSARS anniversary