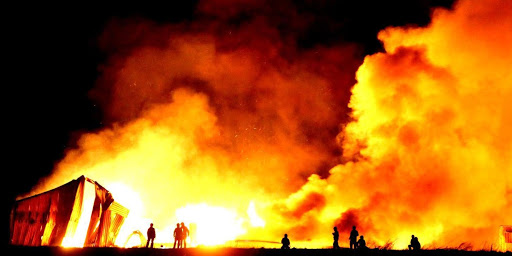 The inferno, which started from the clothes section of the market at about 1p.m., extended to some other parts of the market, including the areas overlooking the expressway.

Many lock-up shops that were not affected were forced open to assist their owners remove their goods.

One Mr. Charles Obi, who owns a provision shop in the market, said: “l just came back from church, when someone called my attention to the market fire.

“I rushed to the scene to see if my shop has been affected, but thank God that my shop was safe.’’

A Cosmetic Dealer, Mr. Ifechukwu Mmadu, said that he was lucky to be within the market early enough to remove his goods before the fire gutted his shop.

Meanwhile, the Anambra State Government as well as Professor Chukwuma Soludo and Mr. Valentine Ozigbo the governorship candidates of the All Progressives Grand Alliance (APGA) and Peoples Democratic Party (PDP), respectively have condoled with the victims of the fire.

In a statement by the Commissioner for Information and Public Enlightenment, Mr. C. Don Adinuba, the Anambra State government condoled with the people and promised to plan, re-design and build a much more modern market in the town.

Adinuba said: “It is regrettable that a good number of the indigenes and residents of the town were adversely impacted by the inferno. The fire claimed not just buildings and market stalls but also vital goods and even cash.’’

Soludo and his PDP counterpart, Ozigbo also assured the victims of the fire incident that they would do better to improve their welfare, security of their markets when they become governors.