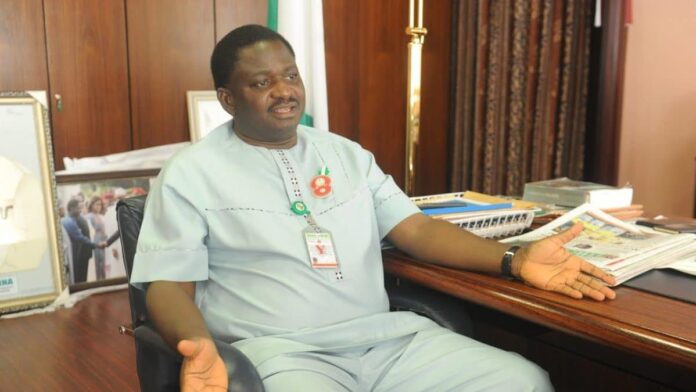 Abaribe should be in prison – Femi Adesina

Femi Adesina, Special Adviser to President Muhammadu Buhari on Media and Publicity has lashed out at Enyinnaya Abaribe, the Senator representing Abia-South Senatorial District of Abia State for ‘exacerbating the security challenges’ Nigeria is currently faced with.

In a post titled: WEIGHTY MATTERS ABOUT OUR COUNTRY, published on his known Facebook page on Thursday night, Adesina berated Abaribe, saying the senate minority leader should be cooling off in jail.

“Some people incite violence through words or actions, thus exacerbating the security challenges we have. You wonder where they are from, and why they would further stoke a burning fire with incendiary materials,” Adesina wrote.

“There is one funny Senator who talks about the mismanagement of our diversity as a country, yet he daily uses foul language against those in leadership. He stood surety for someone bent on dismemberment of the country, and when that one vanished, and he should have been cooling his feet in prison, the Senator still spews rubbish. Chief ‘mismanager’ of our diversity. And the President had words for him and his ilk, who exist round the country: ‘We are ready to arrest and prosecute all persons inciting violence through words or action. Our resolve for a peaceful, united and one Nigeria remains resolute and unwavering. The seeds of violence are planted in people’s heads through words. Reckless utterances of a few have led to losses of many innocent lives and destruction of properties.’”

Recall that Abaribe stood as surety for Nnamdi Kanu, the leader of the outlawed Indigenous People of Biafra (IPOB), who who jumped bail some few years back.

Kanu was granted bail in April 2017 after 18 months in detention, but he fled Nigeria later that year after soldiers invaded his residence in Abia state during a military clampdown on IPOB members.

He was, however, re-arrested in June and extradited to Nigeria to face trial for treasonable felony.

The IPOB leader has since been remanded in the custody of the Department of State Services (DSS) pending the continuation of his trial.