Emergency Digest
Home News The Death of Ladi and unending Legal Battle over Estates of Late... 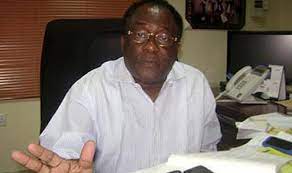 Chief Ladi Rotimi-Williams passed away at about 3 am at St Nicholas isolation hospital from Covid-19 complications despite being vaccinated.

His death was confirmed by his younger brother, Chief Kayode Rotimi-Williams.

“I just lost my elder brother, Chief Ladi Rotimi-Williams (aged 74+) to Coronavirus. He passed on at 3am this morning,” he said.

Meanwhile, some years ago, Chief Ladi and his siblings engaged on legal battles over properties, shares and billions left behind by their father.

FACTS have now emerged on why the children of late legal luminary, Chief Frederick Rotimi Alade Williams (SAN), are at war over his estate few years after his demise.  The four children, Chief Ladi Williams (SAN), Kayode Williams, Folarin Williams and Tokunbo Williams at each other’s neck as to how the estate of their father should be shared.  This is because after his death at the age of 85 years, no single document, be it will, valid legal vesting deeds or trust duly registered was found on how the estate of the late Chief could be properly shared among his children.

Although they are all from the same parents, they are at war over their father’s estate scattered across Lagos plus his shares in many bluechip companies, said to be worth billions of naira.  Presently, Ladi is not on talking terms with Folarin and Tokunbo, their wives and kids also don’t talk.

Shortly after FRA was buried, the brothers met at the instance of Folarin who hinted them on how their late father wanted his chambers and estate to be run.  The children even before the death of their father were not at peace because FRA did not hide his soft spot for Folarin.  Ladi and Folarin were no longer at par with each other because of the decision of FRA to put Folarin on the board of a few bluechip companies where he had shares.  Since there was no will it was discovered that FRA had allegedly instructed that the chambers be handed over to Folarin and Tokunbo along with other juicy properties.  Ladi was shocked at this development knowing his father whom he had served for many years.

Even before this period, FRA had a company, United Investment Limited (UIL), which managed his vast estate, both shares, properties and bank accounts.  The said company was opened up for the late chief and the children to own 9,800,000 shares of N1.00.  a total shares of 10 million units was shared thus: Chief FRA Williams owned 9,920,000 which is the largest; Ladi 20,000; Kayode 20,000; Folarin 20,000 and Tokunbo 20,000.  Share certificates were issued to these family members according to the units they all held in the company and a reflection of the shareholding in the company’s 2000 and 2001 audited accounts be ratified and signed by the late chief and the four sons which was effected.  But less than a year after FRA’s death, his third and fourth sons, Folarin and Tokunbo reportedly filed a suit through their counsel, Mrs. Clementina Abimbola Williams (SAN) before an Ikeja High Court, seeking an order of the court to delete the name of Chief FRA Williams from the Register of Titles Land Registry, Lagos State, in respect of one of Chief Williams properties, a two block of 16 flats at Plot 299, Akin Olugbade Street, Victoria Island, Lagos and replaced it with United Investment Limited.  The suit which was said to be without the consent and knowledge of the first and second sons, Ladi and Kayode, was also without a letter of administration.

The presiding chief judge, Justice Ade Alabi, who may have thought that all persons interested in the said property was in agreement, granted the prayer in 2006.  But it was an enraged Ladi and Kayode, who got wind of this move and quickly filed a motion on notice asking the court for stay of further proceedings and setting aside the ruling. Not only that, the two went ahead to write the Lagos State Attorney-General and Commissioner for Justice and the Registrar of Titles, Land Registry Directorate about the suit and the ruling obtained in their absence.

Justice Kazeem Alogba who later handled the case immediately in his ruling directed the Registrar of Titles in Lagos State not to honour any request for rectification of the Register of the property being contested by the children of late FRA.  He also granted the application for stay of proceedings, and refused to refer the matter for arbitration.  However, the attempt to rectify the register of titles may have spurred Ladi Williams to beam his searchlight into the estates of his late father where other shocking revelations were uncovered.  One of which was the signing and production of a parallel resolution to the ownership of the company, UIL, the same day the original document was signed by all before the death of FRA.  The counterfeit resolution as to the ownership of the company’s shares did not have names of Ladi and Kayode.

It was even reported that the Corporate Affairs Commission (CAC), wrote to notify acknowledging request to transfer Chief FRA Williams UIL’s shares to Folarin and Tokunbo, this was meant to share the late FRA Williams 9,800,000 shares in UIL even though shares of such nature cannot be transferred by trust.  Suspecting that the assets of his late father may have been tampered with behind him, Ladi moved to the Federal High Court in Lagos to wind up UIL before the assets were diverted, Ladi accused his younger brothers of making efforts to squander UIL’s assets woth N9.7 billion and its shares in First Bank also worth N6 billion.  He alleged that his siblings committed fraud by forging their late father’s signature on some vital documents, he also alleged that after the death of Chief Williams, Tokunbo and Folarin, took control of UIL and excluded him from the management and affairs of the firm, a development contrary to the fact that he (Ladi) is still a director and a shareholder of UIL.  He, however, prayed the court to wind up the firm.  Justice Abutu who presided over the case in 2007 barred both Folarin and Tokunbo, their agents, servants and privies from disposing, transferring, changing or operating or in any manner dealing with the funds and assets of their father in UIL.  Justice Abutu also restrained the two (Folarin and Tokunbo) from tampering with assets and properties of UIL.

Meanwhile, Tokunbo and Folarin did not take the matter low as they filed a stay of proceedings and prayed the court to hold that there was an agreement reached by the four brothers as regards sharing of FRA Williams estate.  Folarin stated since there was an accusation of fraud, the matter should be referred to arbitration which the judge agreed to.

What followed suit later was a legal firework between the two parties, already there are two appeals pending the Lagos Division of the court of appeal.  While one is by Folarin and Tokunbo, the other is by Ladi and only time will tell where the pendulum of justice will swing.