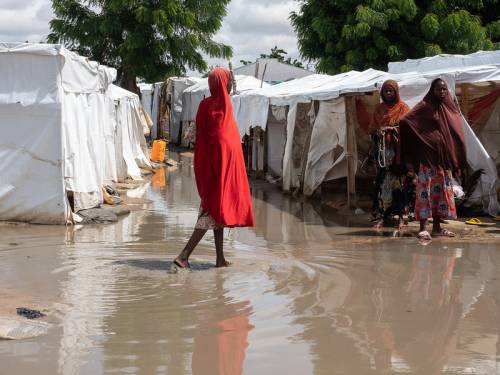 Changing climates are having serious environmental impacts across different parts of the world, and Maiduguri in Borno State, Northeast Nigeria, is not exempted from this.

Currently faced with a 12-year-old insurgency with its ever-changing dynamics, resource access has become far more limited in the state capital than ever before.

The insurgency, which has displaced millions of people, has also put them at risk of the impact of changing environments. Aside from not being able to access more resources, residents in different Internally Displaced Persons (IDP) camps are also at the mercy of government authorities who often falter in their responsibilities. At the base of this helplessness is the possibility of flooding that threatens to push displaced persons out of their camps.

Aside from the impact of climate change, massive displacements in other towns, leading to forced migration to Maiduguri, have also affected the geography of the city, causing it to lose surface soil.

A study by the University of Maiduguri glossed on the connection between the city’s vulnerability to flooding with urbanization and associated environmental negligence, stating that “this urbanization has generally induced flash floods, solid waste, distorted land use and environmental pollution.” It also noted that “the floods were largely due to excess solid waste generated and encroachment of large development into natural drainage channels in the metropolis.”

In April 2021, Relief Web, a humanitarian information website, published a report which highlighted the cases of flash floods in Borno, putting at least 800 IDP households in jeopardy. Borno, because of its placement on a higher latitude in the country, is often overlooked as a flooding concern.

In the 2021 flood outlook prepared by the Nigeria Hydrological Services Agency (NIHSA), the state is not listed in the 27 highly probable flood risk states, with no indication of the likelihood of flash floods. Data analyzed has revealed that this is not true.

Information extracted from Geohazard Risk Mapping Initiative in May 2021 has shown that there is a risk of flood affecting about 31 IDP camps in Maiduguri.

Maiduguri is about 167 km² in size. The total area under assessment for flood risk is about 209.27 km² wide in a landmass area encompassing the Maiduguri metropolis and the areas surrounding the town. About 193km² of this total landmass is vulnerable to flood at different levels; 88.3km² of the total landmass is considered a high-risk area. And over 9,500 IDPs are vulnerable to flooding in these high-risk places. An estimated 17,153 IDPs might be susceptible to the hazard despite living in low-risk areas.

The flood risk analysis also shows that about 52.17 km² of the landmass within the Maiduguri area is considered to have low vulnerability to flood, 76.79 km² of the area falls under vulnerable, while about 11.46 km² is highly vulnerable.