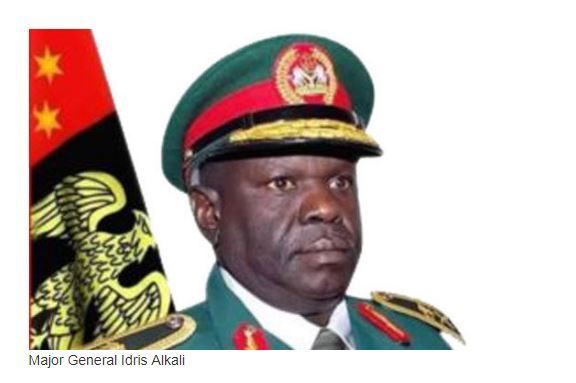 An Islamic human rights organisation, the Muslim Rights Concern, has cast doubts on the sincerity of Governor Simon Lalong of Plateau State in the trial of suspected killers of Major General Idris Alkali (retd).

The group has therefore asked both the state government and the Nigerian Army to tell Nigerians the latest developments in the case.

This was revealed in a statement on Saturday by the Director and Founder of the group, Prof. Ishaq Akintola.

The statement reads: “Major General Idris Alkali (rtd) went missing on 3rd September 2018 while travelling from Abuja to Bauchi via Jos. His vehicle was later recovered from a pond in Dura-Du in Jos South on 29th September 2018 while his body was found more than one month later (on 31st October) in an open well in Guchwet village of Shen district in Jos South Local Government Area after an intensive search. He was later buried in Abuja on 3rd November, 2018.

“It is interesting to note that the locals, both men and women, had played a conspiratorial role in the whole drama. Attemps were made to stop the army from conducting a search for the missing general. Half naked women demonstrated in Jos against the search.

“They claimed the army was profiling the Jos population whom they claimed was ‘innocent’. This caused a lot of delay. It also explains why it took so long to find the body in a well (more than a month) after discovering the general’s car underneath a pond.

“This background, particularly the deceitful and hypocritical role played by the people of Jos, will enable us to understand where Governor Lalong is coming from. The cover-up abracadabra displayed by the women was a mere prologue. The governor is now writing the epilogue by manipulating the judiciary.

“According to unofficial reports reaching our office, the case which was formerly being handled by Justice Danile Longji, is now before Justice Ashom at the Jos High Court. This is because the former judge retired last year.

“Legal experts know what this means. Cases that are designed for endless and inconclusive trials are usually handled this way. The state government knew very well that Justice Longji was about to retire. It also knew that cases being handled by retiring judges have to be reassigned to other judges who will have to start de novo.

“But why assign a case of such gravity to a judge whom the state government knew was about to retire? There is every reason to suspect delay tactics in the Alkali murder case.

“Another deliberate clog in the wheel of justice was the grant of fiat to Joe-Kyari Gadzama (SAN), a private lawyer. Fiat is authority given to a private lawyer to prosecute a criminal case on behalf of the state. This has caused undue delay in the prosecution of the case. Several adjournments have occurred at the instance of the prosecution.

“We put it to Governor Lalong that the Alkali case is being deliberately delayed in the hope that the general public will lose interest in it and it will subsequently be swept under the carpet. But Lalong has grossly miscalculated. This is not just about General Alkali alone. Alkali may be an army general but he was a Muslim and he was killed because of his faith, not because of his profession.

“There has been a strong suspicion for a long time now that Jos is a killing field for Muslim travellers. Thousands of Muslim travelers from North and South who took that route are known to have gone missing in that area. Jos is a zone of death. The murder of Alkali just happened to have been the last straw that broke the camel’s back. The bloodthirsty killers in Jos were just too clever by half.

“The recent killing of thirty two (32) Muslim travelers who were going to Ikare in Ondo State on Saturday, 14th August, 2021 is another pointer. It shows that killers of Muslims have not reneged. The five buses which conveyed those killed would have been driven and pushed under the huge ponds of Jos, never to be seen again, had security agents not raced to the scene of crime. This is why Nigerian Muslims are eager to know how the Alkali case is progressing. Our collective safety on Jos roads lies in the outcome of that case.

“We recall that several vehicles were also found beneath the same pond in which the general’s car was found. Among the vehicles was an 18-seater bus. Where were the occupants? Where were the owners of several other vehicles found inside the pond? Their ethnicities may be in doubt, but we do not have to guess their religion.

“Muslim travelers have been murdered in cold blood in their thousands in Jos. Here is concrete evidence of the killing of Muslims in large numbers in Nigeria but America is only interested in making noise about phantom killing of Christians.

“It is noteworthy that there are hundreds of ponds like this littering the Jos metropolis. How many vehicles have been sunk under them? We may never know. It took the army several days before the Alkali pond was drained and its chilling contents discovered. It is just safe to conclude that thousands of Muslims have disappeared in the Jos zone of death.

“Nigerians need to know the progress report in the Alkali case. The unofficial report in our possession added that only five (5) or seven (7) of those arrested were charged for murder. Others were merely charged for obstructing public officers from carrying out their duties, (e.g. the woman who led the protest in a bid to stop the Nigerian Army from conducting search), unlawful assembly, conspiracy, silence and failure to report a crime to constituted authorities. This second category were granted bail while those charged for murder are still in ‘prison’. But how far is this unofficial report true?

“MURIC calls out the Plateau State Government to speak up, to confirm or to deny our unofficial story. Why are we not hearing about any updates on the trial of General Alkali’s killers? How many people are being tried for the killing? How many were arrested ab initio? How many are on bail? When is the next hearing? Who is the judge in charge and where is his court located? The Plateau State government should speak up on this. Lalong should show evidence that he has not interfered with the rule of law in Plateau State. MURIC wants to know. Nigerians want to know.

“The immediate constituency and employer of the late general, namely, the Nigerian Army, has a role to play here. We are asking Army Headquarters for updates on the brutal killing of a whole general of the Nigerian Army. Is army legal department abreast of developments in the case? Did the Nigerian Army assign one of its lawyers to attend the hearings? We want to hear from the Nigerian Army. An army general should not just die unsong. It will forever constitute a stain on that great institution.

“It is our duty as a human rights group to interrogate Lalong on the killing of a whole general. Right to life is guaranteed by Section 33 of the 1999 Constitution of the Federal Republic of Nigeria. But General Idris Alkali was denied that right to life. That matter cannot end like that just because Governor Lalong has gone to army headquarters in Abuja to beg the top hierarchy.

“Is the army developing cold feet on this case? Will any army general or senior officer be safe again in this country? This is a man who served his country meritoriously and rose to the rank of army general before retiring gloriously. The trial of his killers deserves the army’s attention and concern.

“We therefore demand an official statement from both the Plateau State Government and the Nigerian Army. Tongues are wagging. Rumours are flying at the speed of light. Democracy failure to give an update on the Alkali affair will be interpreted to mean somebody somewhere is hiding something. Is Simon Lalong listening?”