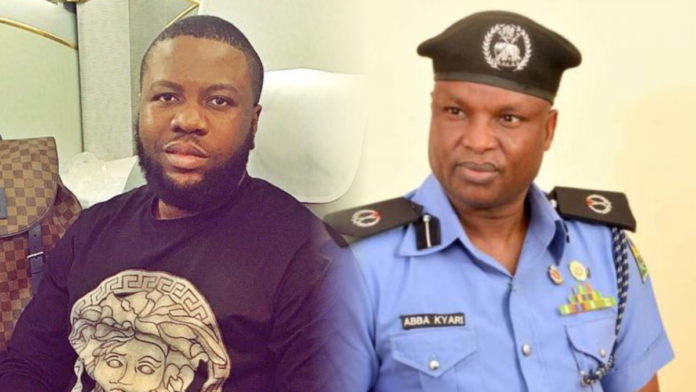 A United States District Court of California, has requested a pre-trial arrest and detention of suspended Nigeria Deputy Commissioner of Police, Abba Kyari, for 10 days.

The US court papers sighted by THISDAY requested a 10-day pre-trial detention of Kyari on criminal grounds.

But Kyari, who was suspended, because of his alleged involvement with a notorious internet fraudster, Ramon Abbas, aka Hushpuppi, Wednesday, made a new claim, insisting that the criminal reached out to his team to help him recover N8 million for a friend.

He also appeared before the DIG Joseph Egbunike special investigation panel on Tuesday, where he presented his defence. The committee is sitting at the Force Headquarters Conference room, Abuja.

THISDAY learnt that the committee was considering his defence even as he was expected to attend daily sittings of the panel.

The US court papers were signed by Acting US Attorney, Tracy Wilkinson and two other officials.

“Plaintiff, United States of America, by and through its court of records hereby requests detention of defendant (Abba Kyari) and gives notice of the following factors: temporary detention requested on the following grounds: that (b)the defendant is an alien not lawfully admitted for permanent residence or (c) defendant may flee,” it said.

The US District Court of California had indicted Kyari over his involvement in a $1.1million fraud committed by Hushpuppi.

The development led to his suspension by the Police Service Commission (PSC) on the recommendation of the Inspector-General of Police, Mr. Usman Baba.

Kyari is presently facing an investigation panel set up by the IG and headed by DIG Egbunike.

But in a new claim on his Facebook page, which was later deleted, drawing the ire of his followers, Kyari, who earlier claimed that Hushpuppi sent N300,000 to his tailor after admiring his dressing on social media deleted his post and instead claimed in the new post that the suspect asked his team to help a friend recover N8 million.

Kyari, in his first facebook post had claimed that the international fraudster only called his office about two years ago to say somebody in Nigeria “threatened to kill his family here”.

The suspect, Kyari said, was trailed and arrested, but after investigation, it was discovered that there was no actual threat to anyone’s life and that “they are long-time friends, who have money issues between them hence we released the suspect on bail”.

He said the suspect “saw some of my native clothes and caps on my social media page and he said he likes them and he was connected to the person selling the clothes and he sent about N300k directly to the person’s account”.

In his new post, Kyari deleted the part where he said Hushpuppi sent N300,000 for clothes and claimed his office was reached a second time to help recover N8 million.

“Nobody demanded or collected any money from Abbas Hushpuppi. He can be interviewed publicly in the presence of the world media by the people holding him to confirm this.

“He also called for another case in June 2020 and complained about a financial transaction with a second person, whom he said his friend sent N8 million to and pleaded for his friend’s money to be recovered. He sent transaction slips and other evidences to prove their case against the person.

His new claim, however, drew the ire of some of his followers, who lampooned him.

“I thought you were smart and intelligent”, one of the followers said.

“Even if you delete your post, you will still answer to your crime”, another said.

One hour later, most of the negative comments were deleted leaving more of the supportive ones.