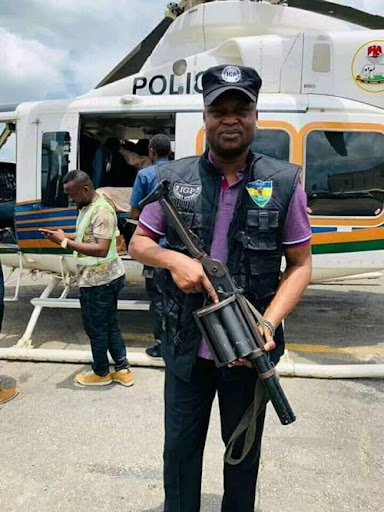 A Senior Advocate of Nigeria, Muiz Banire, says that a Deputy Commissioner of Police, Abba Kyari, could turn himself in to the Interpol if he is certain that he is innocent of the allegations preferred against him by the United States Attorney’s Office, Central District of California.

The American court had issued an arrest warrant against Kyari for his alleged role in the case of alleged international fraud involving five other persons and running into over $1m.

He noted, however, that Kyari’s indictment by the American court is a dent on Nigeria’s image.

The Lagos State ex-Environment commissioner was reacting to DCP Kyari’s suspension by the Police Service Commission on Sunday.

According to a statement by the commission’s Head of Public Relations, Ikechukwu Ani, the decision to suspend Kyari was conveyed in a letter signed by a retired justice of the Supreme Court, Justice Clara Bata Ogunbiyi.

Speaking on the Channels TV programme, Banire said, “Certainly, it is a dent on the image of the country, but we are handling the issue very well so far.

“What is going on is an internal investigation of the matter and, until a prima facie case is established against the officer, he is still presumed innocent.”

Banire’s view tallies with the American court’s Press statement on Kyari’s arrest warrant, which stated that “A criminal complaint and an indictment contain allegations that a defendant has committed a crime. Every defendant is presumed innocent until and unless proven guilty beyond a reasonable doubt.”

Continuing, Banire said, “Even at that, I’m not aware of any specific request for extradition now. All that we have learnt so far now is that there is an arrest warrant issued by a court of law in the United States, the implication of which is that Interpol is supposed to execute it anywhere  the officer [Kyari] is found.”

On what the law says about the arrest warrant issued by the Central District of California against Kyari, Banire said, “He is wanted in the United States for the purpose of prosecution, but then, before a Nigerian citizen can be extradited, there are processes to be followed.

“Although the law is neither here nor there, I know that there is this 1967 Legal Notice that is often relied upon by the Office of Attorney General of the Federation when it comes to the issue of extradition between Nigeria and the United States.

“However, some of us believe that Section 12 of the Nigerian Constitution will certainly override that particular Legal Notice and, for that, it cannot be said that there is an extradition treaty that is enforceable between Nigeria and the United States.

“But be that as it may, my expectation is that, before we can even go to that level, the preliminary investigation as it is about to be done is necessary for us to establish a prima facie case before we can trigger the process of any extradition.”

“So, beyond the investigation being done by the government, he can also avail of himself of the opportunity that is already afforded.

“So, as far as law is concerned, what is being done is due process.”

The US Department of Justice, District of California, on July 28 released a statement titled, ‘Six Indicted in International Scheme to Defraud Qatari School Founder and then Launder over $1 Million in Illicit Proceeds,’ in which Kyari’s name featured.

According to the statement, A federal grand jury indictment alleges an elaborate scheme to steal more than $1.1 million from a business person attempting to finance the construction of a school for children in Qatar – and the subsequent laundering of illicit proceeds through bank accounts around the world.

The three-count indictment charges three U.S.-based defendants who were arrested the previous week – as well as three defendants believed to be in Africa – with conspiracy to commit wire fraud, conspiracy to engage in money laundering, and aggravated identity theft.