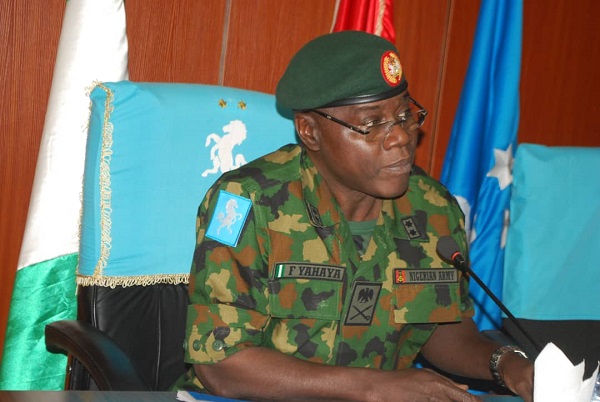 The Chief of Army Staff, Lt. Gen. Faruk Yahaya, has said that with synergy in the armed forces, security challenges confronting the nation would be surmounted.

Yahaya spoke at the decoration ceremony for the 24 newly promoted Assistant Inspectors-General of Police (AIGs) at the Force Headquarters in Abuja.

The decoration of the AIGs is the first phase in the decoration exercise of a total of 167 senior police officers recently approved by the Police Service Commission (PSC) following their recommendation by the Inspector-General of Police, Mr Usman Baba.

This comes as the IG announced a new manpower development policy which he said was a deliberate protocol to identify, elevate, and position professionally competent officers, who will act as the strategic police managers expected to drive the new policing vision and give effect to strategies in response to emerging security threats in the country.

The army chief said the existing cooperation between the armed services in the spirit of the policy of joint operations of security forces initiated by the federal government showed that such cohesion would be impregnable for adversaries.

He said each security agency was equipped with unique skills and competencies which when harnessed would defeat any adversary.

“Each agency has its own unique and individual skills and competencies. It is this individual competence that we should in unison harness and charges through our adversaries and there is no adversary that can withstand our collective efforts.

“We have always worked together and we will continue to work together”, he said.

“Let’s improve on this energy. and together we will confront all our adversaries and I say again, no adversary can withstand our synergy when we operate together and we are already seeing it”, he said.

In his remarks, the Minister of the Federal Capital Territory, Muhammed Bello, commended the senior officers on their promotion.

He expressed delight that the FCT Police Commissioner, Mr Bala Ciroma, was promoted to the rank of AIG.

He, therefore, pledged to continue to work with military and paramilitary agencies to secure the nation’s capital.

“I wish to assure the IG and the chief of army staff that the FCT administration will continue to work very closely with all the military or paramilitary agencies in the Federal Capital Territory to make sure that our seat of government, our center of unity is made safe secure for all”, he said.

In his remarks, the Minister of Police Affairs, Alhaji Mohammed Dingiyadi, congratulated the officers and urged them to rededicate themselves to their newly assigned roles.
He commended the IG, whom he said was the first police chief that did not retire DIGs as was the practice prior to his emergence.

Earlier in his remarks, the IG urged the newly promoted AIGs to deploy their wealth of experience in support of his leadership.

He reminded them that a higher responsibility was expected of their new roles and demanded loyalty, courage, and professionalism.

He said the officers must be prepared to discharge the duties of their new rank within the dictates of the rule of law and their new ranks.

“Most importantly, you must in your actions be conscious of the reality that you could be called to account for your actions and the inactions as you carry out higher policing responsibilities”, he said.