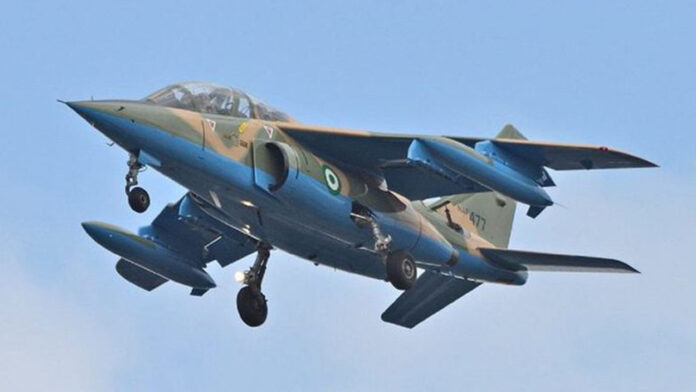 Airstrikes carried out by fighter jets of the Nigerian Air Force have killed a woman and her four children at Sububu, in Zamfara State.

It was gathered that Sububu Forest is one of the major hideouts of bandits in Zamfara.

According to reports, the Air Force was targeting bandits at the expansive Sububu Forest located between Shinkafi and Maradun Local Governments when the unfortunate incident happened.

From the forest, bandits usually launch attacks on travelers on Sokoto-Gusau Road as well as villages in Sokoto and Zamfara States.

The aerial missions were conducted by the air force at around 2 pm on Monday, sources reveal.

Confirming the strikes, residents stated that the fighter jets missed their targets by dropping the bombs on the Sububu village, rather than the bandits’ enclave in the forest.

“The bombs killed a woman and her four children. Two of the kids, a boy, and a girl, were teenagers. One elderly woman was also wounded in the attacks,” a Sububu resident said.

Another source told reporters there was suspicion that the jets used the GPS coordinates of some expensive smartphones stolen from Sokoto that were being charged at the village.

“You know they own Sububu (village). Nobody goes there, not even security personnel and other officials,” he said.

Speaking to the airstrikes, NAF spokesperson, Air Commodore Edward Gabkwet, confirmed the multiple airstrikes on the area to PRNigeria.

Commodore Gabkwet said the military carried out “the precision airstrikes on the armed bandits after an intelligence and identification of the locations to avoid collateral damages.”