Emergency Digest
Home News A Pastor, Four Others Arrested For Being In Possession Of N15.8million Fake... 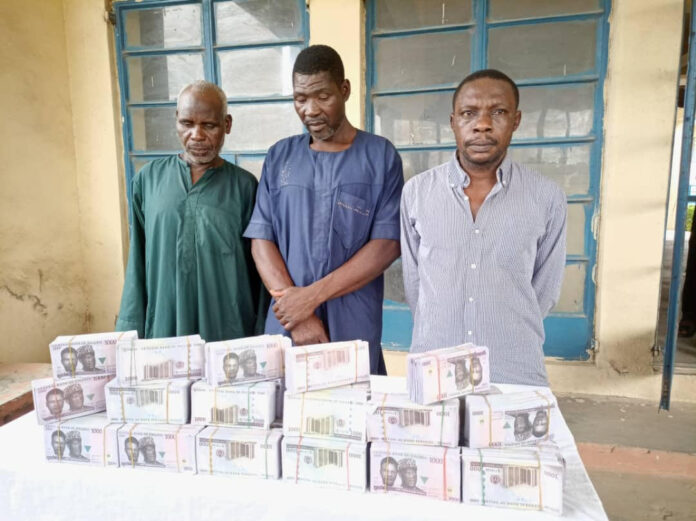 A Pastor, Four Others Arrested For Being In Possession Of N15.8million Fake Currency Note, Human Trafficking

The Niger state police command has arrested a Pastor, Sabastine Dabu, and three others for being in possession of fake naira note worth N15.8 million in Kontagora, the headquarters local government area of the state.

The three suspects were picked up in a hotel at Kontagora by police detectives attached to Kontagora division following a tip of when they were looking for buyers of the fake currency which are all in one thousand naira denomination.

The principal suspect Emmanuel Akazuwa who confessed to crime claimed that he bought the fake currency from one Nifom who is presently at large at Katsina-Ala in Benue State at the rate of N150,000, and met Pastor Sabastine at a Cathedral Congress in Makurdi who promised to assist him to sell the currency.

According to Emmanuel, Pastor Sabastine then contacted Umar Mohammed who was to arrange for a buyer, and then agreed to meet at the hotel when the detectives swoop at them, arresting the three of them with the fake naira note.

Also, two people, Osaruwumen Ewodaru (49) of Opasa-Kpamba in Edo state and Olaoluwa Adebanjo (43) of Ido, Airport road, Abuja have been arrested by the state police for attempting to traffic five girls to Libya en route Kano.

The suspects and their victims were intercepted and arrested along Abuja-Kaduna highway on 1st of July while on their way to Kano in an attempt to move them to Libya for prostitution.

The five female victims are all between the ages of 18 and 23 years and are from Ondo, Edo, Delta and Ogun State.

While Osaruwumen Ewodaru confessed to having taken one of the victims with him from Benin to embark on the journey and also in possession of a marriage certificate to claim that the victim is his wife in order to clear any suspicion on the way, Olaoluwa Adebanjo acted as transporter who accepted and assemble the victims at Ido park, Abuja for onward movement to Kano State in order to cross to Libya.

While the five victims were rescued, all the suspects have been transferred to Federal Criminal Investuion Department (FCID), Abuja for further investigations