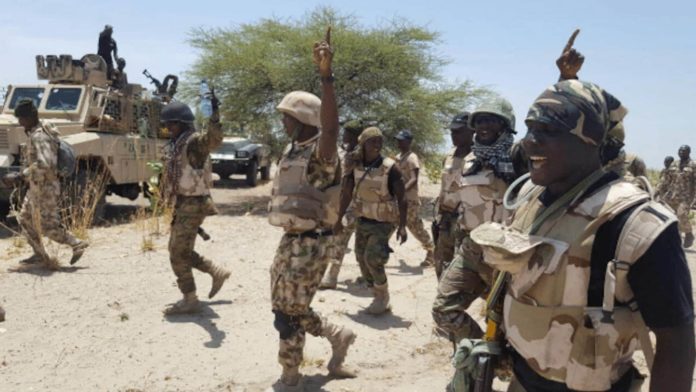 EMERGENCY DIGEST- Troops of 8 Division of the Nigerian Army have eliminated an unspecified number of bandits in Talata Marafa Local Government Area of Zamfara.

The Director, Army Public Relations, Brig.-Gen. Onyema Nwachukwu, disclosed this in a statement on Saturday.

Nwachukwu said troops, while on patrol, came under fire from bandits operating along Mayanchi-Dogo Karfe and Fagantama villages in the area.

He said the bandits were overwhelmed by the superior firepower of the troops in the fierce encounter that ensued where scores of bandits were neutralised.

According to him, troops also recovered one PKT riffle, large cache of ammunition, and a motorcycle.

Nwachukwu also disclosed that the troops neutralised five bandits in another encounter at Bingi village in Bungudu Local Government Area of the state.

He said that the bandits withdrew in disarray, having sustained severe gunshot wounds during the duel while one AK47 riffle, one Motorcycle and three mobile phones were recovered.

According to him, the Chief of Army Staff, Maj.-Gen. Faruk Yahaya, commended the troops for their combat resilience and renewed vigour.

“He also urged them to sustain the aggressive posture in order to defeat all criminal elements operating in the North West and other parts of the country.

“He urged communities in the North West to support the troops with useful information at all times to enhance anti- banditry operations,” he said. (NAN)