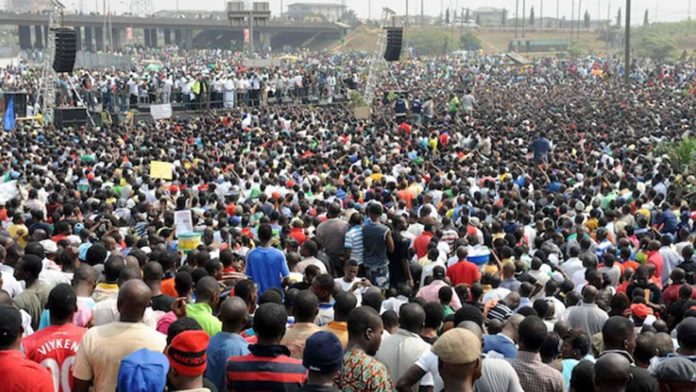 The United Nations Population Fund has set Nigeria’s population at 211 million while the life expectancy for men and women was retained at 54 and 56 respectively.

This is contained in the UNFPA’s latest ‘State of the World Population 2021’ report which was launched by the Country Representative of the UNFPA, Ms. Ulla Muella; the Minister of Women Affairs, Pauline Tallen; and the Chairman of the National Population Commission, Nasir Kwara, in Abuja on Tuesday.

Our correspondent, who went through the 153-page report, noted that Nigeria’s population was put at 211 million, closely behind Brazil, which has a population of 214 million.

The new figure is higher than the figure of the NPC, which was 206 million as of December 2020.

The UNFPA retained Nigeria’s life expectancy at 54 for men and 56 for women. On average, only Chad and the Central African Republic have a lower life expectancy than Nigeria.

Speaking on the theme, ‘My Body is My Own: Claiming the Right to Autonomy and Self-Determination,’ the UNFPA country representative said only 46 percent of married women in Nigeria were able to make decisions freely on their sexual and reproductive health.

Muella described the development as unfortunate, adding that there was a need for all stakeholders to do more to promote women’s rights.

In her remarks, the Minister of Women Affairs and Social Development, Pauline Tallen, said the Federal Government was working hard to tackle fear and stigma of survivors of violence, weak community, and facility referral systems, lack of counseling services for women and girls, and the communities as well as seek justice for victims.

She, however, argued that entertainers were frustrating the government’s plans.

Tallen added, “It is almost disheartening to note that while we are confronting these obstacles to increase advocacy, the entertainment industry which has large followership of young minds, continues to indirectly support the abuse of the female body as a sex object through vulgar lyrics and employment of female dancers in compromising customs.

“This is indeed unacceptable. I want to use this opportunity to appeal to producers and writers to support us so that together we can ensure that the Nigerian society is able to guarantee an environment where girls and women can make choices about their bodies without the fear of violence or having someone else decide for them.”