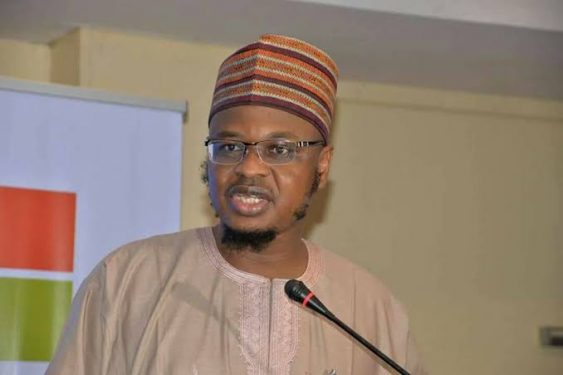 NIMC: Why Pantami should act fast
by Seye Adebayo

The National Identity Number popularly known as NIN is a set of unique 11-numbers issued to individuals/citizens who have registered with the National Identity Management Commission (NIMC). The NIMC captures the digital identity of all citizens and issued them the NIN as their unique digital identity. The NIN is issued in a slip which is free. The slip is a lawful means of identification for Nigerians.
The NIN registration is part of the government’s national strategy to build a database on all citizens for enhanced economic planning. It consists of 11 non- intelligible numbers randomly chosen and assigned to an individual at the completion of enrolment into the National Identity Database (NIDB). The law mandates NIMC to manage the NIDB in addition to its other primary duties that include to provide and regulate identity management in Nigeria; and to issue National Identification Number (NIN) and ID card to all eligible persons. In fact, by law, under the NIMC Act No 23 of 2007, all citizens and residents must have the NIN to conduct ID-based transactions. All identity (ID) based transactions will soon become permissible only by the use of the NIN.

Nigeria’s need for digital identity is long overdue, considering the avalanche of current national challenges. The absence of digital identity has caused more harm than good. Identities are switched at random by criminally minded people, social services is crippled for lack of data to aid effective planning, financial institutions find it nearly impossible to grant credits as background and credit checks are nearly impossible to conduct
Digital identification can be an important catalyst for various development initiatives on the continent and globally such as impacting on trade, governance, social protection, financial inclusion, domestic resource mobilisation, as well as security and human rights. Towards this ends, the Federal Government through the Minister of Communications and Digital Economy, Dr. Isa Ali-Pantami, initiated the National Digital Economy Policy and Strategy, NDEPS, for 2020 to 2030 for a Digital Nigeria.
Unveiled and launched by President Buhari on November 28, 2019, the NDEPS provided a holistic and sustainable approach towards the development of the nation’s digital economy based on some 8 pillars. These include: Developmental Regulation; Digital Literacy and Skills; Solid Infrastructure; Service Infrastructure; Digital Services Development and Promotion; Soft Infrastructure; Digital Society and Emerging Technologies; and Indigenous Content Development and Adoption. Digital Identity falls within pillar 6 which is aimed at minimising cybersecurity breaches, and other criminalities.
The merging of the National Identity Management Commission (NIMC) into the communication ministry was strategic in boosting the enrolment of Nigerians on National Identification Number (NIN). To this end, the government overhauled NIMC and directed the agency to increase the enrollment by a minimum of 500%, from the current 500,000 to 2.5 million every month. Subsequently, The Federal Government declared September 16 as National Identity Day and has supported the enrolment of Nigerians for Digital Identity (ID) across the country.

The current myriad of security challenges in the country are traceable to the lack of identification data to know who is where what they do, and tracing or investigating any deviant activities by the security agencies, unlike now that Kidnappers have the effrontery to pick up phones and contact the families of their captive and demand and bargain humongous amount of money as ransom. These phone lines were either partially registered or not registered at all, hence the owners or operators of such lines are unknown. Worried by these dastardly acts, the minister directed the Nigerian Communications and Commissions (NCC) to mandate all the telecommunication companies to block all the SIM Cards of Nigerians that are not linked with the NIN.
The Telcos were subsequently given a two-week deadline in which to allow Nigerians to link their SIM Cards with NIN or be blocked completely. However, following a wide outcry over the limited timing, the deadline was extended by a period of 3 weeks, from 30th December 2020 to the 19th January 2021. Be that as it may, NIN enrolment and the concomitant linkage with SIM Cards is a sure way of fighting kidnapping and digital identity fraud in the country. While the data so captured would assist the government in identifying the demography of its citizens for budgetary and other policy formulations. With NIN, the Nigerian government’s economic policies would be tailor-made towards having a direct bearing on the lives of Nigerians.

However when it appeared NIMC was overstretched with the massive influx of Nigerians seeking enrolment. The Minister of Communications and Digital Economy, Dr. Isa Ali-Pantami, approved the licensing of 173 private sector Agents and 30 State Governments/Public Sector Institutions to conduct enrolment of Nigerians and legal residents into the National Identity Database (NIDB) on behalf of the National Identity Management Commission (NIMC). Above all, the minister also approved the development and release of an improved NIN slip and a mobile application that will help in securing NIN, a part of the Federal Government’s policy to improve the process of obtaining NIN and linking it to Subscribers Identification Module, SIM, aligning with the national digital economy policy for a digital Nigeria.
While the enrolment is going on smoothly across the country, there appeared some challenges threatening the noble cause. On Thursday, January 7, 2021, the NIMC workers had embarked on strike over poor welfare package, lack of tools and risk of exposure to coronavirus; leading to the suspension of national identification number registration process. Some of the demands include a review of the “lopsided and irregular” promotion done in 2017 and 2020, implementation of the approved salary structure and its appropriation in the 2021 annual budgets and adequate provision of work tools for civic data enrolment.
However, it is my humble submission that in as much as the NIMC has its own challenges as a government agency hitherto suffering from budgetary “neglect”, the handiwork of saboteurs throwing spanners into the wheel of NIN enrolment progression can not be dismissed. Saboteurs have infiltrated the NIMC as an agency and the telecommunication companies in their bid to frustrate the efforts of the Federal Government towards creating a harmonised data system of its citizen and, by extension, securing the country.
While some NIMC staffers and their agents have turned the process into some brisk businesses extorting money applicants, others have decided to take a short cut of buying numbers, the risk of doing so could not be swept under the carpet. It is worthy of note that even the Economics and Financial Crimes Commission (EFCC) had to issue a statement warned Nigerians against selling their NIN to some unscrupulous persons, in a statement on January 11,2021 . The EFCC spokesperson, Wison Uwujaren, disclosed that some unscrupulous persons are cashing in on the exercise to induce applicants to sell their NIN for a fee. According to him, the buyers of the numbers are also trading with them to persons whose motives are anything but noble.
This is not to say that the NIMC was not doing its best, but the criminals and people with dubious intentions, within and outside the shores of Nigeria, are all out towards blackmailing the process. They even formed a conspiracy theory that the Federal Government was enforcing the NIN enrolment in order to hack into its citizens’ personal privacy for dubious reasons. Thankfully only a few Nigerians believe in this balderdash. It could only be deduced that these theorists don’t want Nigeria to have an accurate data of its population. They, instead, are comfortable seeing the Federal Government relying on foreign statistics subject to manipulations and all sort of blackmail, in formulating policies for its citizenry.
In these troubled times It is, therefore, imperative for the Minister of Communications and Digital Economy who is the supervising minister of NIMC to up his games in order to upend the sinister conspiracy as well as root out the saboteurs ruining his efforts towards creating a digital identity for Nigerians. He needs to work around the current COVID 19 pandemic to prevent the NIN registration becoming a ground for infection and spreading of the infection, without compromising on the quality of the registration process, this is the time to put to use the mobile registration units of NIMC, Synergise with other government organisations like the NYSC to open up more registration units in all the Local governments areas of the country, Leverage on our fast-growing human and digital resources to create a more secure and effective means of registration, and importantly engage a network of Civil Society Organisations which will put eagle eyes, or rather, checkmate the activities of would be racketeers or saboteurs of this once in a lifetime NIMC national assignment. There should also be a complaint line dedicated to NIN enrolment issues. These lines would serve as a feedback mechanism sort of for the minister to be in the know of the goings-on in the agency. The minister could also, mandate the agency to leverage digital technologies to publicise its activities so as to keep Nigerians abreast of the enrolment processes.
With the proper handling of this round of NIN registration and the current victories by the armed forces and security agencies, we are gradually on our way to building a more secure Nigeria of our dreams.
Seye Adebayo can be reached via: [email protected]

Residents Protest over Construction of Gas Plant In neighborhood