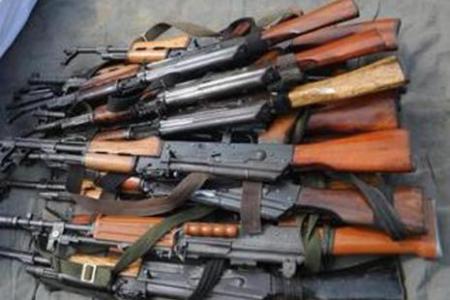 The Nigerian Army has revealed how it was able to recover no fewer than 70 AK-47 rifles and 191 Dane guns from bandits and other criminal elements terrorising the North-West region of the country.

The army made the recoveries during Operation Sahel Sanity and Operation Hadarin Daji in the North-West which covers Zamfara, Katsina, Sokoto and Kaduna states.

Katsina has lately been under violent attacks despite the visit of President Muhammadu Buhari with two successive school abductions which attracted national and global condemnations.

The 17 Brigade Commander, Brig Gen W.B. Idris stated this when he received the Chief of the Army Staff, Lt Gen Tukur Buratai, during an operational visit to the Nigerian Army Special Super Camp 4 Faskari in Katsina State on Monday.

Buratai extended Operation Sahel Sanity which started around June and was supposed to end by December 2020 to March 2021.

He was thereafter briefed on the operational activities, successes and achievements of the troops.

“These included the neutralisation of 210 bandits, the arrest of 326 suspected bandits, 46 logistics suppliers and 11 rustled cattle buyers. Also, during the period, 70 AK 47 rifles, 191 Dane guns, 4,987 of 7.62mm special ammunition were recovered.

“Similarly, 619 kidnapped victims, including the recently rescued 344 students of Government Science Secondary School, Kankara, in conjunction with other security agencies were rescued.

“Also, during the period, 7,668 cows and 1,842 sheep were recovered and handed over to their owners,” the brief said.