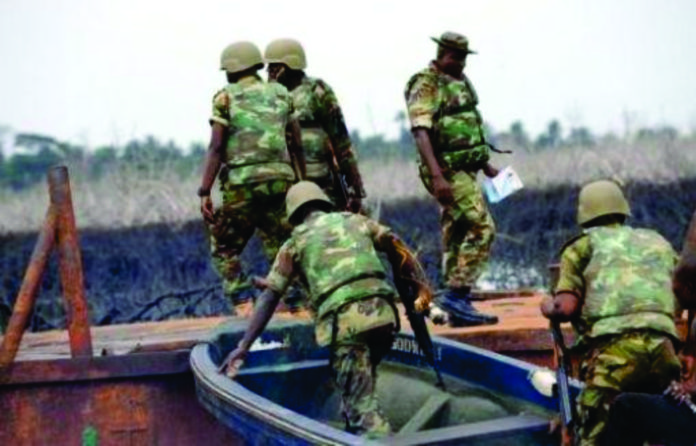 10 suspected pipeline vandals have been intercepted and arrested by troops of Sector 2 of Operation Delta Safe.

It was learnt that the Delta Safe troops got credible intelligence on plans by vandals to move Shell Petroleum Development Company stolen pipes from Amabuluo Federated Community, in Ekeremor Local Government of Bayelsa State, to an undisclosed location in Warri, Delta State.

The troops, according to the Coordinator of the Defence Media Operations (DMO), John Enenche, however mobilized on a fighting patrol to the general area.

Enenche, a Major General, while speaking during a press briefing in Abuja, said the troops arrested 10 crew men, a Tugboat and Barge loaded with 113 stolen pipes, suspected to have been vandalized from the South Forcados Opukushi trunk line, during the operation.

He added that the suspects and all recovered items have been handed over to the appropriate authority for further action.

Maj. Gen. Enenche, further disclosed that the Forward Operating Base IBAKA gunboats on routine patrol around Utan Iyata creek have intercepted a medium-size wooden boat laden with 72 drums of 300 litres, with product suspected to be illegally refined AGO being transported to Cameroon.

According to him, the items and the 2 suspects are currently in custody to be handed over to the relevant agency for necessary action.

“Within the period, Operations Calm Waters II and Swift Response have continued to record more successes. In this regard, about 353 bags of 50kg foreign parboiled rice and 48 cartons of Tramadol tablets containing 10 packets each concealed in 35 cartons were arrested and handed over to Nigerian Customs Service. Other items intercepted were one bale of used clothes, as well as 850 litres of PMS,” added the DMO Coordinator.