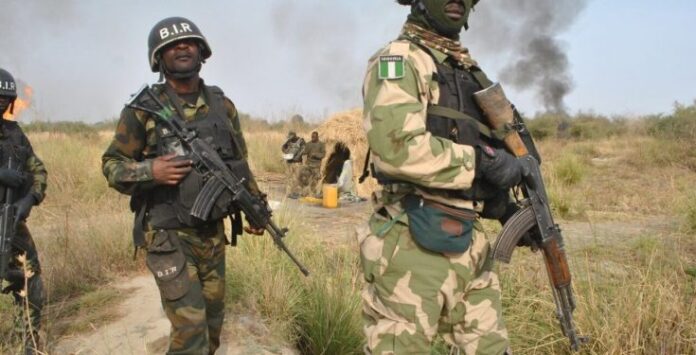 Troops of the Armed Forces of Nigeria eliminated no fewer than 869 criminal elements, in the country, from 1 July to 30 September 2020.

Coordinator of the Defence Media Operations (DMO), Mr. John Enenche, during a media briefing in Abuja, said N9,040,300 litres of stolen AGO and 33,500 litres of DPK were recovered, within the period under review.

Enenche, a Major General, added that a total of 1,708 arrests were made, as well as recovery of large cache of arms and ammunition.

According to Maj. Gen. Enenche, it is obvious that the Armed Forces of Nigeria is winning the war against the enemies of the country, from their operations within the third quarter of this year.

“The High Command of the Nigerian Military wishes to thank the general public for their support and further solicit their cooperation towards providing credible and timely information that will facilitate proactive engagements in our operations. The third quarter performance of operations conducted by the Armed Forces of Nigeria and other security agencies is a show of our commitment, synergy and determination to lay down our lives to protect our great Nation.

“Troops are further encouraged to remain resolute and decisive in securing the country. The general public is thus encouraged to continue to support the gallant troops by providing credible intelligence to the troops operating within their localities.”