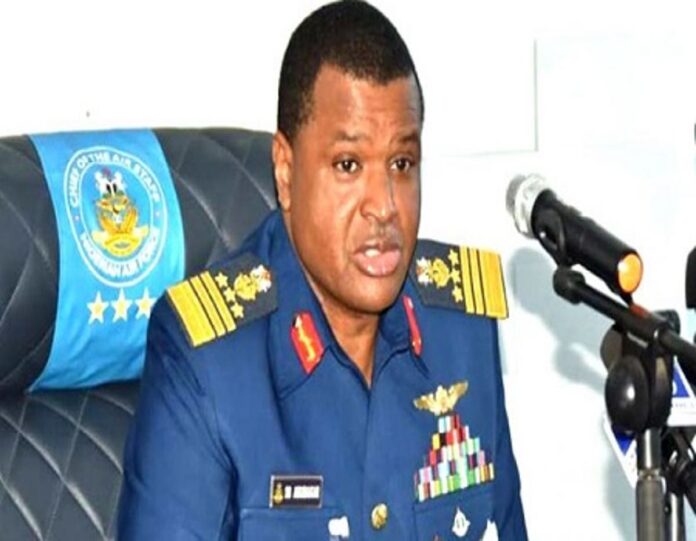 NAF flags off special operational base in Gombe

The Nigeria Air force has flagged off the construction of 203 Combat Reconnaissance Group, an operational base for effective response to contingencies in the North East on Monday.

The Chief of Air Staff, Air Marshall, Sodique Abubakar who was in Gombe for the Ground breaking ceremony of the Combat Reconnaissance Group said the group is also expected to add significant value to NAF operations in the fight against insurgency and other security challenges in the country.

“The newly established Group, which is strategically located in Gombe to enable the Nigerian Air Force more effectively respond to contingencies in the North East, is expected to add significant value to our operations in the fight against insurgency and other security challenges in the Country. The activation of the Unit also marks another milestone in our efforts to establish presence in critical parts of the Country.

“Upon assumption of Office in 2015, we charted a new course for the Service, with a Vision to; “Reposition the Nigerian Air Force into a highly professional and disciplined force through capacity building initiatives for effective, efficient and timely employment of air power in response to Nigeria’s national security imperatives”.

He said in line with this Vision, “we have expanded the structure of the Service by creating 2 new Field Commands, one of which is the Special Operations Command headquartered in Bauchi, as well as several new units including some Quick Response Groups and Quick Response Wings, to bring security closer to the people of Nigeria”.

According to him, some of these units are located at Gembu in Taraba State; Gusau in Zamfara State; Owerri in Imo State and Agatu in Benue State. Other locations where the NAF has established new units include Kerang in Plateau State; Katsina in Katsina State; Ipetu Ijesha in Osun State; Lafia in Nasarawa State as well as Birnin Gwari in Kaduna State.

“Moreover, in response to the security imperatives in the North East of the Country, we have particularly expanded our facilities at the Headquarters of the Air Task Force of Operation LAFIYA DOLE in Maiduguri, Borno State as well as at the Nigerian Air Force Base in Yola, Adamawa State, while establishing a Unit in Damaturu, Yobe State to give us a wider reach for our operations. These new units and expansions, coupled with others carried out across the Country, have undoubtedly enhanced the capacity of the Nigerian Air Force to ensure that Nigeria is secured and our citizens are able to pursue their legitimate aspirations without fear”, he said.

Earlier Governor Inuwa Yahaya of Gombe state who conducted the ground breaking ceremony alongside his Deputy, Manassah Jatau commended the Air Force for the quick response for the construction of the base after the approval of 230 hectares of land by the state government in August this year.

Yahaya who stressed the strategic location of the state said the establishment of the base will position the Nigerian Air Force to swiftly respond to present and future security challenges.

In his welcome address, the Air Officer Commanding Special Operations Command, Air Vice Marshal C A Ohwo said the Ground-Breaking Ceremony signified the official commencement of the construction of infrastructures and provision of utilities for 203 Combat Reconnaissance Group Gombe.

“The group was established to increase the Nigerian Air Force response to meet the demands of the changing security environment and effectively cover some of the capacity gaps for counter terrorism, insurgency and anti-banditry. The group is an armed unmanned aerial vehicle Unit comprising wings and squadrons equipped to cover conflict areas in NE, NW and NC zones of the country.

“The actualisation of this group would ensure that adequate situation awareness is maintained across the various theatres, thereby enhancing our air operations in the fight against insecurity for the overall well-being of the citizens,” he said.