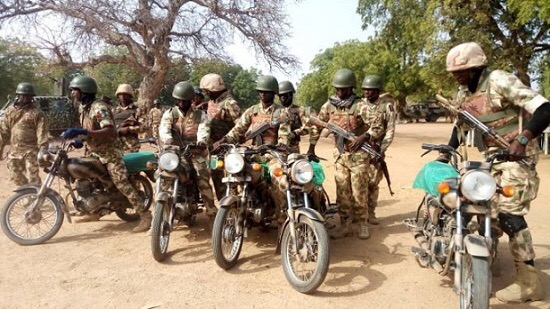 According to him, this was part of the various breakthroughs in their combat operations against banditry activities in the state and the North West States.

He noted that the site, located along Gadan Zaima – Zuru Road in Zamfara State served as a hideout for the suspected bandits, adding that 20 locally fabricated Dane guns were recovered.

He further disclosed that one of the suspects was neutralized while trying to escape.

He said: “Preliminary investigation reveals that aside from sabotaging the nation’s economy, banditry is being financed through these illegal mining activities.”

According to the team, the bandits attempted to attack residents of the area.

The team, however, succeeded in neutralizing one of the bandits while others escaped.

One AK-47 Rifle, magazine loaded with 5 rounds of 7.62mm ammunition and two motorcycles were recovered from the fleeing bandits.

The troops also arrested a wanted notorious bandit named Isuhu Ibrahim, aka Bula, in Wagini village of Katsina, in the company of other bandits that have been terrorizing the area for some time.

The team said 11 brand new locally-made rifles were discovered after a search on the vehicle.

The troops also rescued one adult male and one female earlier kidnapped by suspected bandits.

According to Brigadier Onyeuko, the victims were kidnapped alongside four other persons at Daudawa village of Faskari in Katsina.

He said: “the victims managed to escape from their abductors as a result of the troops’ intense operational activities in the area.

“The rescued persons have been handed over to officials of Faskari LGA for an onward reunion with their families while efforts are ongoing to rescue the remaining 4 victims.”