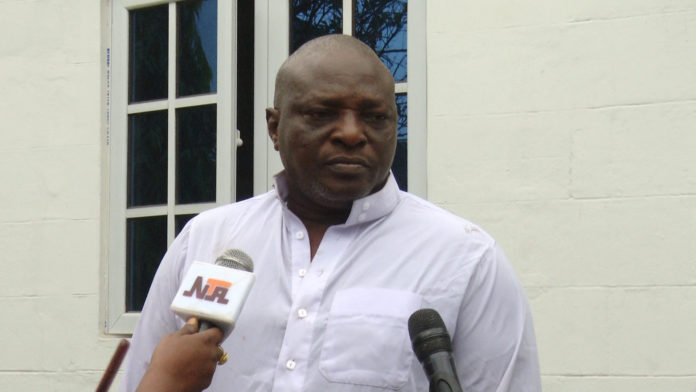 A joint military task force on oil theft and pipeline vandalism operated by the Nigerian navy has captured Shuaibu Ogunmola, the alleged leader of an oil theft racket.

Ogunmola, who has reportedly been operating for decades in some island communities along the Badagry creek, was caught at a hotel in Ilashe.

The activities of the vandals had reportedly led to the loss of millions of litres of crude oil products along the Lagos Atlas Cove strip in the strategic System 2B pipeline network.

Ndu Ughamadu, spokesman of the Nigerian National Petroleum Corporation (NNPC), gave an account of the operation that led to Ogunmola’s capture.

In a statement, he explained that investigations were conducted by officers running operation AWATSE, part of the western naval command in Apapa, Lagos.

Describing their technique, NNPC said the Ogunmola-led gang would hack pipelines within their targeted area, usually along the “System 2B network right- of- way” owned by the corporation.

The gang would then dig holes “metres away from the corporation’s products pipeline, which essentially serve as storage tanks for products directly siphoned from the lines at a hack point.

“These holes which are cast in drums receive products simultaneously from the labyrinth of pipelines connected to the trunk line directly linked to the ruptured NNPC line”.

After harvesting, the oil is siphoned into jerrycans and drums where they are sold to ready buyers at the beach side.

The next port of call for the stolen oil is usually Cotonou, Republic of Benin — a hub for smuggled Nigerian fuel.

Commenting on the significance of Ogunmola’s arrest, Obed Ngalabak, flag officer in charge of the western naval command and leader of the task force, said “the feat was the beginning of a well mapped out strategy to halt the menace of pipeline vandals across the zone”.

He said Ogunmola was the “ultimate godfather of oil thieves in Ilashe and adjoining settlements where he consigned portions of his territory and offered operating rights to other thieves to operate and bring in returns at agreed rates and terms”.

“Rear Admiral Ngalabak said investigation revealed that the Ilashe pipeline axis have been divided into three ‘oil fields’ by the criminals under the operating titles of Shuaibu Point, Dele Point and Bashiru Point,” the statement read.

According to Ngalabak, Ogunmola will be handed over to the appropriate authority for prosecution while efforts are in place to ensure prompt arrest of other members of the syndicate.

Responding, Sam Otoboeze, general manager, group security department of the NNPC, described the capture of Ogunmola as a “victory in the fight against the nefarious activities of pipeline marauders”.