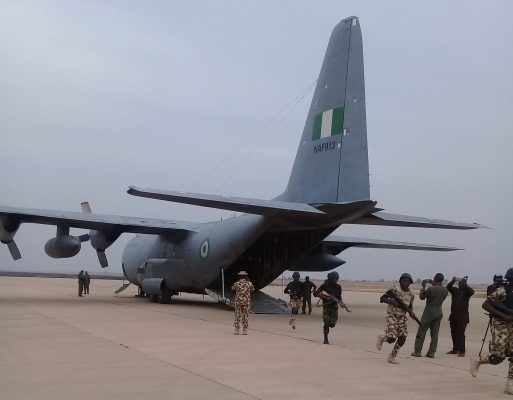 Nigerian Air Force (NAF) has deployed a Special Force as well as jets, helicopters and surveillance aircraft to Sokoto to flush out all bandits in the state.

“Your deployment to Sokoto is in fulfilment of the Chief of the Air Staff promise during his last operational visit to Sokoto.

“The Chief of Air Staff observed security gaps created as a result of the operation in Zamfara,” he said.

He noted that the bandits in Zamfara had found Sokoto as a safe heaven and that they had extended their nefarious act to some of the villages in Sokoto state.

“You are all here for business. And the business is to flush out all the bandits in Sokoto state in collaboration with other sister services and security agencies,” he stressed.

“To assist you in this task, the Nigerian Air Force has deployed jet aircraft, helicopters and surveillance aircraft,” he added.

He explained that these platforms would operate from Katsina and Sokoto Air fields and assured that adequate Jet A-1 fuel, support equipment and personnel are on ground to support the air operations.

The AOC-TAC assured that the Chief of Air Staff, Air Marshal Sadiq Abubakar had provided enough resources for the welfare of the Special Force.

He however emphasized: “I want to remind you once again that your duty here is to protect and save lives; it is not to harass or intimidate the good people of Sokoto state.”

Amao added: “You are all professional and you should operate as such. You must adhere strictly to your rule of engagement and be good ambassadors of NAF.”

He wished them safe and successful operation adding that they look forward to having a peaceful state as soon as possible.”