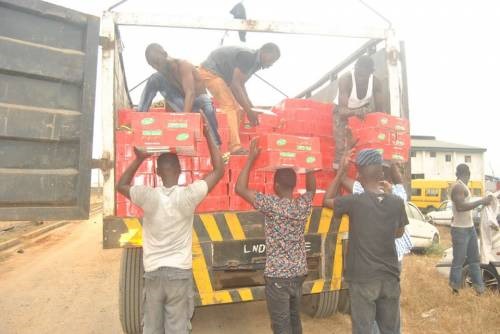 Revealed! Why Police released a confiscated truckload of illicit drugs in Lagos

Last week, the National Agency for Food and Drug Administration and Control (NAFDAC) released a statement that it intercepted a 40-feet trailer with codeine and other illicit drugs in Lagos, but investigation by The ICIR reveals that the same trailer had earlier been impounded by the police after passing through customs.

The haulage truck, which still has the name of Dutch haulage company Centrum Transport and a Dutch registration number, was stopped and confiscated earlier in December by detectives under the IGP X-Squad from the Force Criminal Investigation Department (FCID), Alagbon in Ikoyi, Lagos State.

For days, the vehicle was parked at Alagbon with the tyres deflated until the evening of January 8 when the tyres of the truck were pumped again. By the next morning, the truck had disappeared.

But acting on intelligence, the operatives of investigation and enforcement directorate of NAFDAC, who said they mounted a six-hour surveillance, intercepted the trailer at Oshodi.

In that moment of trying to move the trailer to their warehouse, officers of the Nigeria Customs Service and Nigeria Police Force suddenly appeared at the scene and argument of which agency to take possession of the trailer ensued.

At that scene, police had asked customs officers to go to borders to mind their job because they had earlier collected bribe to let in the truck, a source told The ICIR. Police also brushed off the protest of NAFDAC to confiscate the vehicle by telling the NAFDAC officials that they would sell off the drugs as they had done to other cases referred to them.  The source described the altercation as a big battle among the officers of the three enforcement agencies.

Eventually, police took control as the truck was moved to the police’s Area D Command in Mushin.

Upon joint inspection of the goods in the trailer, it was discovered that it had cartons of Barcadin cough syrup with codeine and other illicit drugs.

This web of conspiracy and fraud is coming less than a year after the Federal Government had announced a ban on the production and importation of cough syrup containing codeine because of its addiction epidemic. The ban had actually followed a public outcry over the abuse of codeine in the country.

The ICIR’s reporter had arrived Lagos at night on January 9 after receiving information that the police had impounded a haulage truck carrying illicit drugs, but planned to release the vehicle as those in charge of the case had been bribed. By the time the reporter reached the FCID, Alagbon, on Thursday morning, the truck had been released.

A source, however, told The ICIR that the suspects were charged to court. But at Igbosere Magistrate Court 1 where the case was brought upon, the case file could not be found and the court clerks could not remember any recent case that had to do with importation of illicit drugs.

The clerks told The ICIR that the only way to find out about the case file and what the suspects were charged with was to get hold of the case file number from the prosecutor.

Though the police prosecutor, Henry Obiazi, declined to talk to The ICIR about the case, or the court the suspects were arraigned, or the charge brought against them or even the next adjourned date of the trial, he also declined to disclose the case file number.

In addition, Niyi Ogundeyi, police public relations officer at FCID, Alagbon, said he could not comment on a matter under investigation without authorisation from the police’s headquarters in Abuja.

As at the time the vehicle was driven out of the FCID, Alagbon, it was not clear whether the release was at the instance of a court order or the discretion of the police.

A source who is knowledgeable about the case, told The ICIR that police would not have released the vehicle without charging the suspects to court and that the suspects might have been charged with a lesser crime after they collected bribe.  In that instance, the source said, the police could do so to absorb itself of the responsibility for releasing the vehicle.

After receiving a huge bribe, police arraigned the suspects at Igbosere Magistrate Court with a charge different from the crime committed by the suspects in order to let them off the hook, a source told The ICIR in confidence.

The suspects: Luke Mba, 38, and Falodun Gbenga, 40, were arraigned on January 3 with two-count charge of allegedly stealing pharmaceutical goods, rather the crime of importing illicit drugs into the country.

The first charge read: “That you Luke Mba ‘m’  and Falodun Gbenga ‘m’ sometimes in December, 2018 at Mazamaza in the Lagos Magistrate District did conspired together to commit felony to wit: having possession of property reasonably suspected to have been stolen and thereby commit an offence punishable under section 411 of the Criminal Law of Lagos State 2015.”

Then, the second charge goes thus: “That you Luke Mba ‘m’ and Faladun Gbenga ‘m’ on the same date, place and time in the aforementioned Magisterial District did have in your possession or under your control or unlawfully cartoons of pharmaceutical goods reasonably suspected to have been stolen and thereby commit an offence punishable under section 328(1) of the Criminal Law of Lagos State 2015.”

The case is between the Inspector General of Police and the two suspects. Henry Obiazi who declined to tell The ICIR anything about the case was the police prosecutor while an inspector named Adeleke was the police investigation officer. The matter was subsequently adjourned to February 11.

However, the following day after the arraignment, one of the suspects Faladun Gbanga  filed a motion on notice for the release of the truck which the court granted.

“Upon reading the affidavit in support of the motion on Notice deposed to by Gbenga Falodun Male, Adult, Christian, Nigerian Citizen, and a Transporter residing at No. 2, Asumo Akera Street, Mowe Nla, off Gberigbe Road, Ikerodo, Lagos State sworn to and file at the Magistrate Court Registry Igbosere, Lagos dated 4th day of Novemeber, 2019 [Januray 4, 2019] and after hearing N. Lawani of Counsel Claimant/applicant move in terms of his motion paper,” wrote Olufolake Oshin, Chief Magistrate of Igbosere Magistrate Court. “It is hereby ordered: an order releasing on bond to the applicant’s vehicle (truck) with its content impounded and in custody of the Respondent Viz IGP X – Squad.”

A source told The ICIR that the area commander of Area D Command in Mushin, Soji Akinbayo, has commenced an investigation into the circumstances that led to the release of the vehicle by the court and police.

I commend officers of the Apapa Command of Nigeria Customs Service for their rejection of $412,000 (₦150m) bribe offered by an importer who wanted officers to clear container of Tramadol, a prohibited pharmaceutical product. Nigerians are proud of all of you. God bless you. pic.twitter.com/FbOReb0qfL

The drugs were manufactured in India and imported through the Seme land border.

“What is clear is that someone doesn’t want the drugs to get to the public despite the bribes,” a source told The ICIR. “That perhaps explained why NAFDAC was alerted upon the police’s release of the vehicle.”

According to NAFDAC, the trailer was carrying Barcadin with codeine (cough syrup) – 588ctns x 200bottles x100ml.

“The Agency has resolved to prosecute the suspect in this matter when the police hand him over to us,” said Mojisola Adeyeye, the director general of NAFDAC, in a statement.

Spokesperson of NAFDAC, Abubakar Jimoh, declined to talk about whether or not the agency knew that police had earlier arrested and charged the suspects with a crime that bears less sanction before releasing the vehicle.

He, however, told The ICIR that the agency had stopped issuing a licence for the importation of cough syrups with codeine after the Federal Government announced the ban in May last year.

But despite the ban, cough syrups containing codeine are still being sold on the streets of many Nigerian cities, The ICIR investigation has revealed.