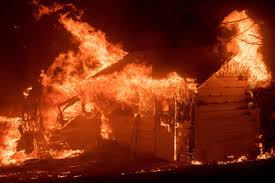 A building and property worth over millions of naira were destroyed when a fire believed to have been caused by candlelight razed down a building housing tenants and shops.

The incident occurred in the university town of Nsukka, Enugu State.

It was gathered that the fire, which started around 8:30 p.m., was as a result of a candle left unattended to in one of the rooms.

Having burnt out, the candle reportedly melted through the rug and fire spread to other rooms of the building before it could be noticed.

A witness said the fire took everybody by surprise because there was power outage at the time of the incident.

The entire building was consequently filled with dark smoke as sympathisers poured water in an attempt to quench the fire before the arrival of the state fire service men 30 minutes later.

All valuable properties in five rooms as well as goods in the two shops reportedly worth over N20 million were destroyed in the inferno.

Speaking with journalists, the landlord, Emmanuel Aka, said the fire razed valuables.

“I managed to jump out of the room with the help of a friend who was shouting ‘fire fire’. I came out to see the entire building was up in flames.

“I called the fire service men and they said that they have received distress call and were on the way. The fire fighting men arrived 30 minutes later but before then, the fire had taken over the entire building. They helped a lot in putting out the fire but everything had been destroyed,” he said.

“We have five rooms, two shops, and four packing stores, all of them were torched by the fire but no life was lost. I have foreign shoes and bags packed inside my room with cash of N185,000 which I was to pay into the bank the next day.

“All of them were razed to ashes including household property including those of the tenants. Also the two shops stuffed with goods of different kinds worth over N20 million. The two shops were of supermarket standard and the biggest shops in Odenigbo roundabout and nothing was picked out of the two shops,” he lamented.

Similarly, vehicular and human traffic were grounded for close to three hours along the Federal Teaching Hospital axis of the Enugu/Abakaliki expressroad when a tanker loaded with diesel burst into flames.

No life was lost in the incident but some of the street lights and other structures along the road were destroyed.

It was gathered that the driver of the tanker, who was coming from Enugu, lost control of the vehicle and in a bid not to endanger the lives of commuters, rammed into the embankment along the road.

A witness said both the driver and his conductor, sensing danger, fled.

As at the time of filling in this report, men of the Ebonyi State Fire Service were still battling to put out the fire.

Also, the Federal Road Safety Corps and the Nigeria Security and Civil Defence Corps were busy controlling both vehicular and human movement in the area.