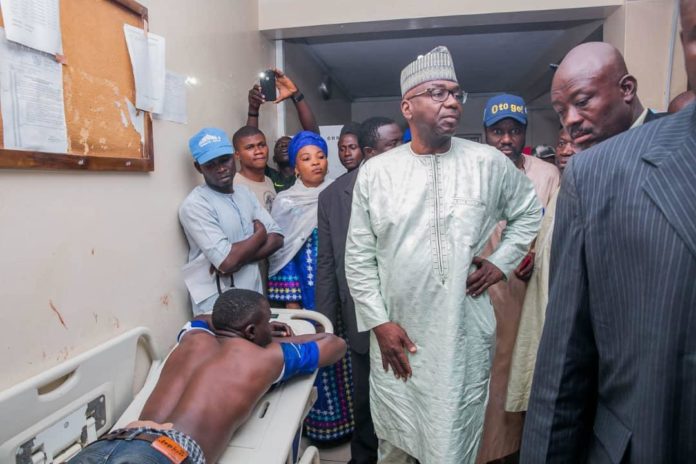 The governorship candidate of the All Progressive Congress (APC) in Kwara State, Abdulrahman Abdulrazaq, on Sunday escaped death as thugs fired gunshots into a rally he was attending, an aide said.

Mr Abdulrasaq’s media aide, Rafiu Ajakaiye, said the thugs are suspected to be working for the Peoples Democratic Party.

In a statement on Sunday, Mr Ajakaye said the attack, which left two persons injured, occurred at Ode Alfa Nda area of the state capital Ilorin.

The violence occurred almost simultaneously with similar attacks on APC supporters in Ile Aiyelabegan, a household that is a spit distance from the Agbaji homestead of the Senate President Bukola Saraki, the statement notes.

“We condemn this brazen resort to violence. This is getting out of hand. Nigerians are urged to prevail on the Senate president to prevail on his party thugs and stalwarts to give peace a chance in Kwara. There is life after politics.

“We call on all the security agencies to buckle down and tame the monsters who are now terrorising everybody in not just Ilorin but everywhere in Kwara where people express their desire for freedom and life more abundant,” Mr Ajakaye was quoted as saying in the statement.

This account is a direct opposite of a statement from an aide to Mr Saraki.

In that statement, Olu Onemola, Mr Saraki’s media aide, said about 11 PDP supporters were injured in an attack by the opposition thugs at the Senate President’s family residence. Apart from injuries, he alleged that about 50 vehicles was destroyed in the Saturday mayhem.

While the police still remain mute on this development, both parties are claiming casualties and accusing each other of the attacks.

The APC, however, alleges that the PDP orchestrated its form of violence to lay blame on the opposition.

Mr Ajakaye in a separate statement sent to PREMIUM TIMES said hoodlums of PDP extraction now go around the state to cause mayhem wearing APC vests.

“We have information that PDP thugs, true to our predictions since December 2018, have now mass-produced vests and other APC logos with which they are going around Kwara State to destroy things and attack innocent citizens. This is an old tactic for which the PDP and its patrons are known.

“We recently alerted the people of Kwara to this evil tactic of the PDP. Armed with guns and other deadly weapons, they are wearing the same APC vests and filming themselves as they carried out this act of violence against Kwarans. An example was what they did today (Sunday 13 January) in Surulere area of Ilorin in the state capital. This was the same tactic they deployed in 2003 and other election periods. These are panicky measures adopted by the drowning dynasty which has lost the battle of ideas,” the statement notes.