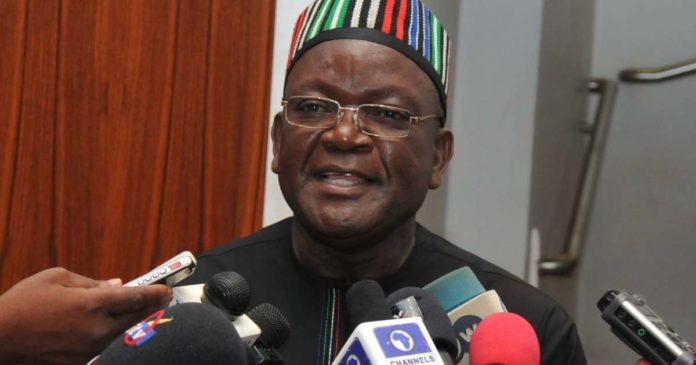 Benue Governor Samuel Ortom has said that the terrain was not safe for Internally Displaced Persons (IDPs), to return to their ancestral homes.

Ortom stated this on Monday in Makurdi, during a two-day symposium on the plight of the IDPs.

The symposium had the theme: “Displaced, Traumatized and Neglected: An Emerging Humanitarian Crises in Benue State”.

The symposium, organized by the State Emergency Management Agency (SEMA), in collaboration with Yavnielle Consult, focused on possible solutions to the humanitarian crises.

Represented by his deputy, Mr Benson Abounu, Ortom said that the IDPs would not return home until adequate security measures were taken to prevent recurrence of the attacks.

He commended the Federal Government for instituting a military operation to tackle the herders attacks in the rural communities.

According to him, there is relative peace following the efforts of the Operation Whirl Stroke in the state.

“But it is still not safe for the IDPs to return home,” he declared.

He charged the resource persons at the symposium to make recommendations that would solve the humanitarian crises caused by the incessant attacks on rural communities.

“Your recommendations should be reduced into just two pages – one to focus on identification of the problems and the other on possible solutions. If it is too bogus, people might not read, making it unimplementable.”

He called on the federal government to commence the reconstruction of damaged property as a preliminary step toward resettling the IDPs.

Earlier, the chairman of the occasion, Prof. Nicholas Ada, while regreting the destruction by herders, urged the resource persons to proffer solutions to the crises based on facts, to help government to formulate policies.

On his part, the convener of the event, Prof. Okpeh Okpeh, said that the symposium was meant to provoke fresh discussions among stakeholders on the plight of IDPs in Benue.

According to him, the state government is catering for 500,000 IDPs, most of whom are women and children.

In an address, Mr Emmanuel Shior, SEMA Chairman, said that the herders/farmers conflicts were comparable to the crises in the North Eastern parts of the country.

Shior described the crises as ” a national disaster”, and called on the federal government to give it all the needed attention.