An unidentified middle-aged man was in the early hours of Saturday found hanging from a tree on Catholic Mission Road, opposite the Court of Appeal in Lagos Island.

The man, clad in Ankara native attire, was found hanging on a rope which looked like a braided long scarf, tied to a fruit tree

The News Agency of Nigeria (NAN) correspondent who was at the scene of the suspected suicide, reports that the episode drew the attention of a mammoth crowd, who stood in groups chatting and wondering what could have pushed the man to hang himself. 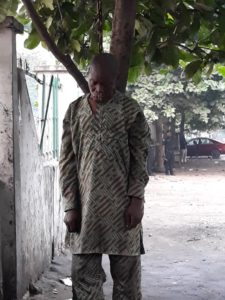 Policemen at the scene of the incident confirmed the happening, but told NAN that they were not allowed to comment on the issue yet until proper investigation was carried out.

They said they would not loosen the noose around the man’s neck or search his pockets for identification purposes until doctors arrived to confirm him officially dead.

Some of the people, who had gathered at the scene, busied themselves taking pictures, but no one could identify the man hanging from the tree. 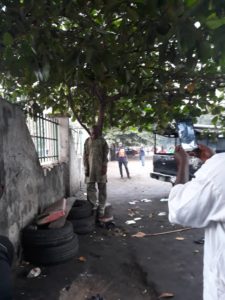 Mr Ige Adedoja, a resident of the area, who was at the scene of the incident, said that traditional rites needed to be performed before anyone could loosen the noose from the man’s neck.

He said that he met many people at the scene and that no-one but doctors could confirm the actual time of death.

The man was still hanging from the tree as at 9am, when this report was filed.