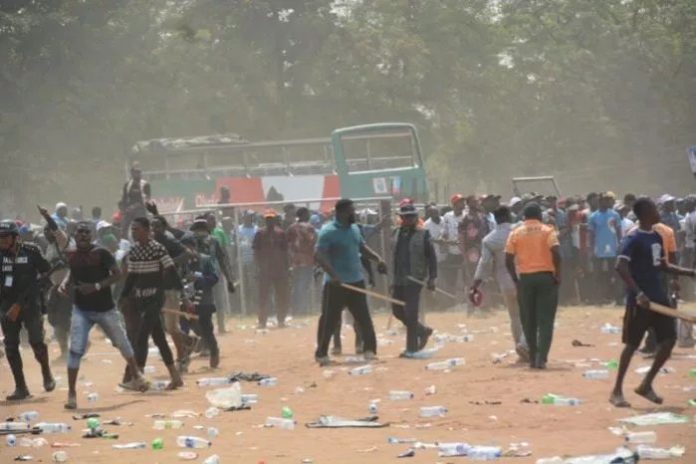 A new twist emerged yesterday in the violence that disrupted the All Progressives Congress (APC) rally in Lagos on Tuesday.

Some members of the National Union of Road Transport Workers (NURTW) in Oshodi accused Lagos State Police Commissioner Imohimi Edgal of being biased in handling the crisis.

The Organising Secretary, Berger Unit, at Oshodi, Semiu Omosansan, who spoke on behalf of others, alleged that the police did not display enough professionalism.

But Adekunle described the police action as a “frame-up.”

Omosansan said: “Adekunle Mustapha (Sego) was not at the place where union’s state Treasurer Musiliu Akinsanya (aka MC Oluomo) was stabbed.

“The incident occurred on the stage where K1 (Wasiu Ayinde Anifowoshe) was performing and he is alive to bear witness that Sego was nowhere close to the stage. This is not the first time MC Oluomo and Sego will attend APC rally as party members and such unfortunate incident has never happened until the state Chairman (Tajudeen Agbede) and his boys decided to attend last Tuesday’s event.

“One of Sego’s boys was killed during the violence. Why is Sego accused of being responsible for that? We are yet to understand the reason to declare him wanted.  MC Oluomo was stabbed in the presence of Agbede Tajudeen, NURTW chairman in Idumota Azeez Lawal (aka Kunle Poly) and others. The police should quiz the two (Agbede and Lawal). Agbede even lied that he took MC Oluomo to the hospital, which is not true.

“In a situation like this, we expect that the Commissioner of Police will carry out thorough and unbiased investigations.

“The police are the custodian of law. We still have huge faith and belief in the Force that it will always do the right thing. We implore the CP to get his facts right.”

Police spokesman Chike Oti urged Adekunle to come out and clear himself.

He said: “This matter is not debatable, it is on camera. Sego was caught on camera unleashing violence on people. That is the reason he was declared wanted. It is not a case of peddling falsehood or perception, it is about reality. Our declaration of Sego wanted still stands. Whatever anybody has to say on the matter, such a person should come to the police. You do not resort to violence to resolve issues.”

Adekunle last night challenged the police to release the video evidence for the world to see.

He said: “Whoever has any videotape of Sego unleashing mayhem on people should let the world see it. Whosoever has any evidence against Sego should come forward with it. That’s what I want. Anybody can fight for his right with his mouth by speaking against what he feels is not right. Besides, employing the use of a weapon is against the law and nobody on Tuesday can say he or she saw me with any weapon.

“For emphasis, I did not hold any weapon on that day. I only spoke against what is not right. I went to the rally as a member of Team Lagos and not on behalf of the union. I have been a party member since 1999 and we have been in Team Lagos since then. Go and ask Governor Akinwunmi Ambode, Senator Gbenga Ashafa, Oba Demola Elegushi, APC state Chairman Tunde Balogun and King Wasiu Ayinde Marshal what Team Lagos stands for. I was at the rally under the banner of Team Lagos. Agbede came under the banner of the union (NURTW).”

The President of the National Union of Road Transport Workers NURTW, Alhaji Najeem Yasin, has summoned members of the State Administrative Council (SAC) to an emergency meeting in Abuja.

“This is to get to the root of the violence in which some members of the union were mentioned as active participants,” he said.

The union under his leadership, he said, would do everything possible to unravel the role played by all members of the union mentioned in connection with the violence “and whoever that is found wanting or involved directly or indirectly will be dealt with in accordance with the union’s constitution.”

Yasin said members of the union as Nigerians are free to belong to any party, stressing, however, that they should be careful not to drag the name of the union into partisan politics.

“Our union, NURTW, is not affiliated to any party. We are an affiliate of the Nigeria Labour Congress (NLC). Our members are free to belong to any party of their choice. Members who attend political rallies do so on a personal note and not in the name of the union,” he added.

NURTW assured citizens that its leadership will not allow anyone or group of persons to drag its name in the mud.

It said the union is working hard to get rid of some bad elements using its name for their selfish interest.