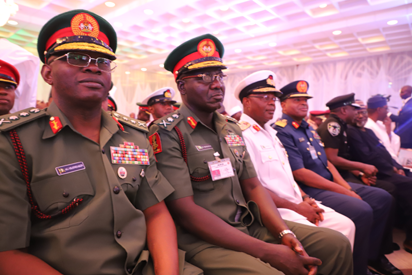 The Independent National Electoral Commission (INEC) says the armed forces will only be used for securing of the distribution and delivery of election materials and protection of election officials in the forthcoming general elections.

Also, the electoral umpire posited that the Police Force will be playing the leading role while other security agencies will play supportive roles.

INEC chairman, Prof. Mahmood Yakubu, said this yesterday while underscoring the need for a new approach to the deployment of security personnel for the conduct of the 2019 general elections.

Yakubu, who expressed his displeasure to the previous uncoordinated approach, which looks as if the security agencies are running a parallel arrangement with the commission.

The INEC chairman said the new approach is based on the provision of the Electoral Act, maintaining that the security architecture for the 2019 elections must be consistent with section 29 subsection 3.

He spoke yesterday during the regular consultative meeting of the Inter-Agency Consultative Committee on Election Security (ICCES).

ICCES consist of all the security agencies and INEC. The committee oversees the security of both personnel and materials during and after elections. It is co-chair by the chair of the commission and the National Security Adviser.

Yakubu, who informed the various representatives of the security agencies of the INEC level of preparedness ahead of the 2019 election said the meeting shall discuss modalities for actualizing the provision of the law as it relates to deployment of security personnel.

“Learning from the experience of some the 195 off season elections conducted since 2015, it is pertinent to draw our attention to the need for a different approach to the deployment of security forces during elections.

“The Nigeria Police Force remains the lead agency for election security. Other security agencies will play a supportive role to the Nigeria police. However, we need a new security architecture for 2019 consistent with the provision of section 29(3) of the Electoral Act 2010 (as amended) which provides as follows:

“Notwithstanding the provisions of any other law and for the purposes of securing the vote, the commission shall be responsible for requesting for the deployment of relevant security personnel necessary for elections or registration of voters and shall assign them in a manner to be determined by the commission in consultation with the relevant security agencies.

“Provided that the commission shall only request for the deployment of the Nigerian Armed Forces only for the purposes of securing the distribution and delivery of election materials and protection of election officials.

“Accordingly, this meeting shall discuss modalities for actualizing the provision of the law. In particular, we are committed to ensuring that elections are organised such a manner that the security agencies are not perceived to be running parallel arrangement with INEC. Rather, it should strictly be INEC’s plan for the election that should be implemented.

This meeting, he therefore said “is convened primarily to update members of the ICCES on our preparations for the 2019 General Elections. It is also an opportunity to hear from the security agencies on your preparations so far”.