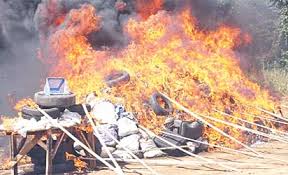 The Commissioner of Police in Lagos State, Mr Imohimi Edgal, on Wednesday destroyed over N400 million worth of hard drugs in a renewed war against narcotics in the state.

He noted that there was connection between drugs and crime, and gave assurance that the police would partner with other security agencies to rid the society of drugs.

“You will recall that when I took over as Lagos Commissioner of Police, I stated that I will fight crime with available resources.

‘‘The substances we are destroying here were recovered during the course of raids on criminal hideouts.

“The substances contained Cocaine, Tramadol, Codeine, Indian Hemp and other dangerous drugs worth over N400 million.

“We know there is a nexus between drugs and crime. Perhaps the availability of drugs and arms are the reasons why we have crimes.

“This is why we have decided to fight illegal use and sale of drugs and we have been receiving assistance through partnership with security agencies and the Lagos State Government.

“These drugs were seized between January 2018 and now.

‘‘Since our store had become filled beyond capacity, we decided to approach the court for order to destroy them,” he said.

Edgal thanked the public for their useful information to the police and urged them to say something whenever they see something.

“I will advise everyone to partner with us so that we can protect our children from illegal use of drugs.

“I want to assure Lagosians that this partnership will be strengthened as we will go from community to community to get the drugs off the streets.” he added.