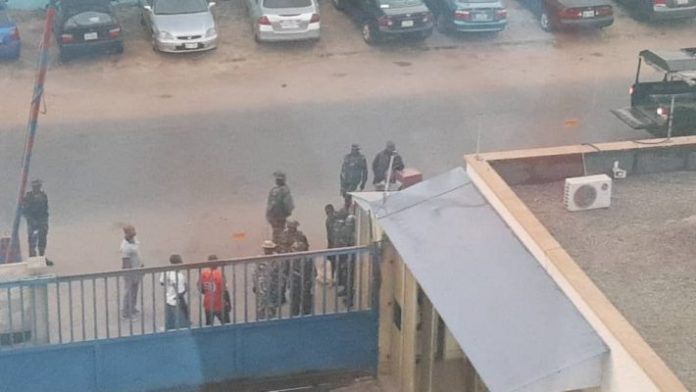 The Civil Society Legislative Advocacy Centre, CISLAC, on Tuesday called for the immediate release of the arrested personnel of Daily Trust Newspapers.

The Executive Director of CISLAC, Auwal Rafsanjani in a statement in Abuja said that the arrest was undemocratic.

Mr Rafsanjani condemned the methods deployed by the Nigerian Army over its allegation of “professional misdeeds’’ related to some publications by the media house.

Recall that the army had invaded the offices of Daily Trust Newspapers in Maiduguri and Abuja, to invite the organisation’s journalists responsible for the publication of a classified military operation plans.

According to its Spokesman, Sani Usman, the disclosure of such classified information by the newspaper undermines national security.

He said that the arrests of staff as well as the invasion of Daily Trust Offices in Abuja and Maiduguri amounted to intimidation.

According to him, the act is a threat to freedom of press and undermines the rule of law.

The CISLAC director called for adequate oversight activities by relevant legislative Committees in the National Assembly on the conduct of military agents across the country.

“We wish to state that a free and proactive press is indispensable in a true democratic society and remains a veritable platform for informing and educating citizens to effectively engage issues of governance and accountability.

“This is possible only by public presentation of facts, and articulation or publication of findings without fear or favour.

“CISLAC is surprised that after about two decades of Nigeria’s return to democratic system, enabling instrument of democracy like freedom of press remains a difficult thing to achieve.

He said this was in spite of the provision of Section 39(1) of the Constitution of the Federal Republic of Nigeria.

The section he said stipulates that “every person shall be entitled to freedom of expression, including freedom to hold opinions and to receive and impart ideas and information without interference.”

Mr. Rafsanjani also noted that Section 39(2) granted every person right to own, establish and operate any medium for the dissemination of information, ideas and opinions subject to laws enacted by the National Assembly.

He said that CISLAC was seriously disturbed by the persistent and unchecked violation of the rule of law in recent times by security agencies including unjustifiable threats against vital institutions of democracy and human rights in the country.

Mr. Rafsanjani said the group was also concerned by the existing high-handed response deployed by security agencies to civil issues and their level of misconducts, creating public doubt about their readiness to conduct themselves appropriately without fear or favour.

He said that the Armed Forces had been mandated to defend the territorial integrity of the country and constantly engaging in aggressive and intimidating civil policing was a way out of its constitutional authority.

“We believe that journalists should be responsible within the rule of law and avoid acts that could undermine the peace and security of the nation.

“We also insist that the military cannot resort to self-help and excessive show of force to intimidate civilians whenever it feels aggrieved.

“The laws of our land have made adequate provisions for how such should be addressed and the military should not act outside of these laws,’’ he said.

Mr. Rafsanjani urged security agencies to desist from taking the laws into its hands as there were proper channels to be followed whenever it felt that it had issues with organisations or persons.

He said that resorting to the use of force and intimidation to harass, not only the supposed ‘enemy,’ but for all living around their area of siege, should be discontinued.

Mr Rafsanjani called on all political parties to strictly adhere to the rule of law and respect for press freedom and human rights in their political dealings toward the general elections.

He encouraged the media as well as members of the public to continue to uphold democratic core values without fear or favour.

Yushau Shuaib of PRNigeria and the hawks called critics, By Haruna Abdullahi Haruspice

Coronavirus: What to do if you want to self-isolate in Nigeria

COVID-19: What you need to know about Nigerian flight restriction

Can a face mask protect me from coronavirus? Covid-19 myths busted

Moshood out, Frank Mba In as Police PPRO