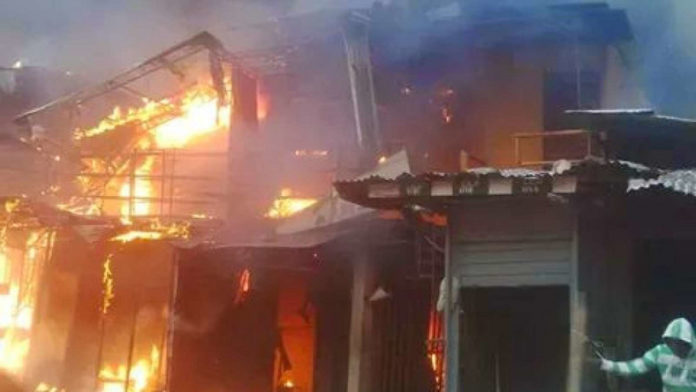 Another fire outbreak on Friday engulfed Authentic Boutique at One Nigeria Line in Kure Modern Market, Minna, barely one hour after the initial fire was extinguished Niger State Fire Service.

Nnamdi Njoku, who spoke on behalf of the shop owner, Chima Njoku, told the News Agency of Nigeria (NAN) that they lost everything as he met only debris smoldering in the shop on arrival.

He said he did not know the cause of the second fire which razed all the goods in his brother’s twin shop as the shop was intact earlier during the first fire.

Njoku said that he would not attribute the fire to electrical fault because the entire market had been without power for three days.

“It is a huge loss we have incurred here as you can see, we lost all our goods to the inferno.

“It is only our boutique shop that got burnt in the second fire outbreak located at One Nigeria Line at the Kure Market.

“The goods that we lost runs into millions of naira because my brother’s goods just arrived from China for the Christmas and New Year sales.

“We really have not exhausted our stock before this casualty happened and it is going to really incapacitate us,’’ he said.

Njoku, who commended the Niger State Fire Service, said that for their timely arrival, more shops aside his brother’s would have been engulfed in the inferno.

Similarly, Mrs Eugenia Umejiego of Warehouse Line, was seen evacuating her goods from her shop, saying she was uncertain of what could happen thereafter.

“I am painstaking in evacuating my goods using manual labour to save my goods which are in millions as you can see this shop is loaded with bags of rice, wheat, semovita, semolina and other goods.

“Many have long removed their goods for fear of the unknown, though it is costly to have all my goods repacked to a safer place, I feel it is better and safer than lose all,’’ she said.

Umejiego said that if the fire could rekindle and engulf another shop after the Niger State Fire Service had extinguish it, anything could happen after, especially in the harmattan season.

Also speaking, Mr Abubakar Abudullahi, a Fireman with the Niger State Fire Service, said the second fire was as a result of combustible material in the burnt shop of Mr Chima Njoku.

Abdullahi said that if they had fire engine, it could have been easier to manage the fire that spread to many other shops.

The News Agency of Nigeria (NAN) reports that security was beefed up at the Kure Modern Market as scavengers and touts were parading to take advantage of the situation.

NAN also reports that economic activities were at its lowest ebb as many shop owners locked up their shops for fear of the unknown while many were seen in clusters discussing the unfortunate incident.