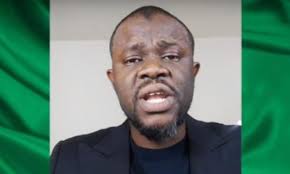 After being declared wanted by the Nigerian Army, an activist, Dr. Perry Brimah has issued a statement urging public to support the troops fighting Boko Haram in the North-East.

The Nigerian Army had declared Brimah, a Nigerian in Diaspora wanted over an alleged fraudulent global fundraising effort to provide food for troops in the North East.

Brigadier General Sani Kukasheka Usman, the spokesman of the army had in a statement urged the general public to provide any information on the whereabouts of man.

In a new statement obtained by the Emergency Digest, after he was declared wanted, Brimah said he was a campaigner for better welfare for the Nigerian troops and especially soldiers fight terrorists in the North.

His statement read thus:
“Nigerian troops at the battlefront fighting and dying to keep us safe are starving. There is absolutely no controversy about this.

“A September detailed report by theCable revealed the unthinkable existence of our brave and gallant troops. “How soldiers fighting Boko Haram beg for food and sleep in classrooms” – theCable.

“Videos by brave soldiers including a recent one after the Metele attack that claimed as many as 200 troop lives, give similar pitiful accounts. No food, no gear, dysfunctional equipment, depleted morale. Worse still, many soldiers are owed their allowances and benefits.

“Since my global fundraiser for the upkeep of Nigeria’s troops went viral thanks to the military, I have been inundated by calls and texts from Nigerian soldiers who have lamented about the deplorable conditions in the northeast.

“Troops scavenge for food. They eat insects and other wild animals. They beg locals for food and often seize food and daily supplies from those they are sent to protect, this as Boko Haram commentator Ahmed Salkida described yesterday, makes Boko Haram more favorable to locals than the desperate, begging and plundering army.

“We must help our soldiers. Imagine yourself at the battlefront with broken-down weapons and vehicles and an empty belly!

“Our civilian rulers and military chiefs get fat, safe in Abuja while our youth are sacrificed at the battlefront. The war against Boko Haram is a cash cow for corrupt military and civilian leadership who use this war to allocate massive sums in the billions of naira for equipment, feeding and logistics with little evidence of the money being used for the purpose it is taken.

“Firstly I implore all patriotic Nigerians to join me on the campaign for better chances for our troops by emailing and calling their representatives at the national assembly and demanding a full military spending probe and that the federal government #FeedNigerianSoldiers.

“Secondly, please buy cans of food: baked beans, corned beef, milk and anything else you can get and package this in vehicles to send to the Nigerian army in Maiduguri. Please address to: 7 Division (JTF-RO) HQ.

“Our global fund raiser has come under harassment and spamming by the Nigerian military leadership which compelled the host website to suspend it until the army agrees to receive the food we planned to purchase with funds donated. But while we attempt to resolve this, soldiers are dying because they are hungry and cannot wait. Please help feed them urgently.

“If you were a soldier battling Boko Haram and you had torn fatigues, no helmet, a jammed gun and empty belly, what will you want us on the outside to do for you?

“Rather than provide for our troops and ensure an actual victory over Boko Haram, the military command is unfortunately more desperately engaged in fighting Amnesty International, United Nations and any one of us who dares to fight for the troops and survival of the people of the northeast and Nigeria at large.

“Our military belongs to Nigeria. Our soldiers are Nigerian soldiers and not government soldiers or soldiers of APC or PDP. Their welfare and professional and tactical proficiency is the responsibility of every Nigerian.